The Repelling the Invasion series

An undeclared war breaks out between the Proxima star system and the loose confederation known as Civilized (Civ) Space. The Dukelsky family finds themselves in the middle of everything. 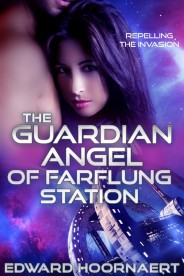 The space pirates think they’ve conquered Farflung Space Station — but they haven’t counted on Sandrina. The attractive young waif has discovered so many of Farflung’s secrets that she’s the most powerful person on the station, though nobody knows it. Yet.

Catt Sayer just wants to survive.  The working-class fugitive delivers military supplies on a decrepit airship, but her hard-won livelihood vanishes when invaders overrun her harsh moon. Even worse, an idealistic, upper-class officer wants her to risk her life on a hopeless trek to attack enemy headquarters – manned by 10,000 soldiers!

If you like The African Queen and the thrill of underdogs finding love while battling a hostile environment, you’ll love Escapee.

Sienna Dukelsky’s unglamorous job is to guide incoming freighters to a safe docking at Farflung Space Station. But when aliens with a startling secret seize control of her tugship, Sienna’s job is suddenly the most important in the entire galaxy.

Constellation XXI, continues the saga of the Dukelsky family begun in The Guardian Angel of Farflung Station and Escapee.

Abandoned on an enemy space station, Minta struggles to survive by nursing an enemy commando, not realizing she is opening her heart to love. When Finn Shanwing falls ill, he doesn’t intend to hide that he’s a cyborg warrior. Neither does he intend to fall in love with the secretive nurse who saves him.

Here’s a glimpse of the war Proxima is waging against Civ Space from the enemy’s point of view. Can love bridge the gap between planets?