Chapter One of Constellation XXI

She didn’t do it.

Couldn’t have. There was simply no way.

The whole thing was impossible. 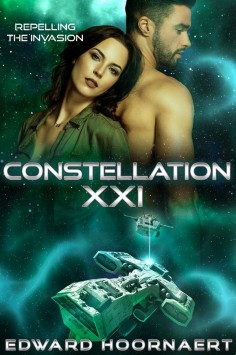 Through him, she’d learned that happiness could transcend all boundaries. Learned her life up to them had been sepia compared to the astonishing crimsons, shimmering golds, psychedelic greens, and black velvet nights that love had revealed. He was her first lover, so she’d naively assumed passion might one day deliver another such life-changing fulfillment. But there were no second chances for undeserving women, and after Crispin, sex wasn’t even sepia, but monochrome.

Now he was here, on this very ship, trailing rainbow memories that seduced her senses and shrouded her brain as powerfully as the shielding on the ship’s reactors. It was no surprise, then, that her first coherent thought, post-ship-death, was that he’d turned off the lights on the bridge to sneak up and throw his arms around her like old times and then —

No. The past was ashes. Love was just a cruel ghost. She had murdered it.

Her second thought when the ship died, a nanosecond after the first, forced a black scowl that banished all color.

Sergeant Vallant. The marine must be hazing her again for no better reason than she was a rookie from a rich and famous family, though a humble twig of the family tree. But how dare Vallant mess with the ship! Turning off lights and artificial gravity was a court-martial offense.

Sienna sent an angry brainwave command through her helmet to turn on the lights. But there was no response. She sent another command. Then another and another and another in a stream of orders that increased in speed and urgency, approaching but never quite reaching panic.

Nothing worked, nothing. The ship was dead

Which was impossible. Multiple levels of redundancy, firewalls, and backups made total power failure out of the question. Didn’t it?

Her third thought after the ship’s death felt like an obituary — but not for the ship. For her. She could almost see the scoffing head shakes of veterans of the tugship service as they gossiped about her with sniggers of contempt.

Have you heard about that Dukelsky idiot? On her first mission — the very first! — the dumb Cherry destroyed one of our newest, most expensive tugships.

“No,” she growled into the blackness. There was nothing she or anyone else could’ve done to kill the ship’s electronics. If she flew it into a comet at top speed, this ship was built so some systems would survive, for a while at least.

Mere facts didn’t matter, though. She was the captain, she was responsible. Period.

When an uncaptain-like whimper escaped her, her cheeks flamed with humiliation, even though no one could’ve heard. “Calm down. Think. Breathe.”

She wished she hadn’t said that word—breathe. If everything else had shut down, why not life support, too? A moment’s thought told her she wouldn’t suffocate, though. She’d freeze to death first. Which was no consolation.

“Until icicles form inside the chambers of your heart, remember to breathe,” she commanded. “Then get a torch.”

She fumbled through tarry blackness. Were torches in storage compartment Starboard-A3 or A4? Her fingertips clicked a compartment open. Now feel over toward the left…

There! Pressing the end of a torch, she was rewarded with light, blessed light. The beam cast sharp shadows that transformed the bridge into a grotesque parody of safety, but that was okay. She could see again, and as long as she could see, she could do . . . something. “What, though?”

She’d spent the last three years memorizing the procedures for troubleshooting every component of this ship. But all those procedures required power — and there was no procedure for recovering from a total shutdown. No procedure for dealing with a tyrannosaurus from prehistoric Earth materializing in the mess hall, either. No need. Both were impossible.

“Captain to co-pilot,” she said without much hope. The Constellation’s co-pilot was a team of four artificial intelligences. Although they used the ship’s main electrical grid by default, each AI also had a battery, an independent power supply, and a backup electrical source. For the co-pilot to go down, the main grid, four batteries, and eight power generators all had to fail simultaneously.

“Captain to co-pilot, please come in.” She squeezed her eyes shut, but that was too much like the deathly darkness, so she reopened them. “You aren’t there, are you.” It was a statement, not a question.

Shock had made her waste time precious time. Habit forced her eyes up to check how long on her helmet’s visor, but it remained dark.

Sienna took several deep breaths as she flicked switches and pressed touch-panels, hoping to troubleshoot systems manually. Nothing worked. Had she really done it, then? Ruined a magnificent, brand new tugship?

An echoing voice from downstairs reminded her that her duty lay with the crew. And her passenger, Crispin Hunt.

Sorry, Crispin. I’ve let you down — betrayed you — yet again.

Before she left the bridge, she attached the other magnetized torch to her belt, pulled the log wafer from the dashboard recorder, and grabbed a water bottle. She rose and spared two seconds to look around for anything else of use then yanked her family pictures from the wall. The violence of that motion caused her to spin in the darkness like a leaf in a whirlwind, but without gravity to confuse her inner ear, she felt no dizziness. The holograms folded easily as she spun. She stashed them in a pocket and only then pushed against the command chair to propel herself toward the ladder. She pushed too hard and slammed against a bulkhead. It would take awhile to get her zero-gravity legs under her…but she wouldn’t have enough time because she would fix the problem. Soon, real soon.

No colors glimmered downstairs. Afraid of what she’d find, she shined the torch at the tube leading to the lower deck. Her thought about a dinosaur materializing in the mess room had been sarcasm, but right about now, nothing would surprise her.

And to think that this mission had begun so well . . .

Want more? Constellation XXI becomes available February XIV, 2019, but you can pre-order it at any of these fine outlets:

Or click the picture below for a quick summary! 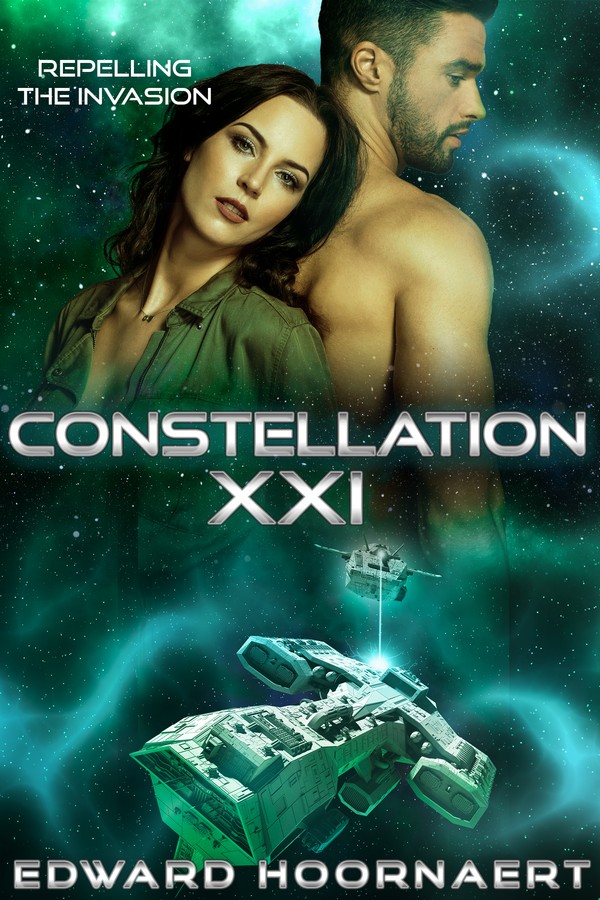