I, Effing Feline, miss my litter mates. I haven’t thought about my four sisters in ages .. . .  until I started reading Ed’s WIP, Triple Wedding. After reading about Teegan Dayle’s efforts to get back into her estranged family’s good graces, I’m all teary. Darn you, Ed!

In today’s snippet, we see the first baby step toward the title’s triple wedding, Teegan is invited to wedding #1, and we get a glimpse of a potential storm cloud on the horizon.

Teegan’s vision of her bouncy sister blurred as her eyes filled with tears of happiness.

“I want you to come to the wedding,” Rayna said. “You’ve got to come, so tell me you’ll come.”

“Of course I’ll come.” But then reality waved a cautious hand, seeking her attention. “If work allows.”

Rayna growled then hissed, sounding like a hungry chasm cat defending its dinner. “Teegan, behave yourself and say you’ll come no matter what.”

She lived just forty miles away, in the southern reaches of the sprawling Eastcott settlement. An hour to get there, four or five hours for the ceremony and reception, and an hour back — it would barely interrupt Teegan’s work schedule. “A black hole opening under my feet couldn’t keep me away.”

And a few more for good luck:

“The wedding will be on the eighteenth of next month because…” Rayna clapped her hands and squealed. “Because Ember’ll have had her baby by then, so we can see our little nephew. Isn’t that wonderful?”

“Fantastic,” Teegan said in a neutral voice at odds with her sister’s glee. Mercedes reached over and squeezed her hand. She knew how explosive Ember and Teegan’s relationship was.

Effing Feline here again. I was feeling so teary about my litter mates that I dug out one of my baby videos. Can you tell which kitten is me?

Due to issues of interest to no one but myself, Triple Wedding will first see the light of day in a compilation of the entire trilogy. It’s been submitted to Amazon but hasn’t yet been made available for sale. 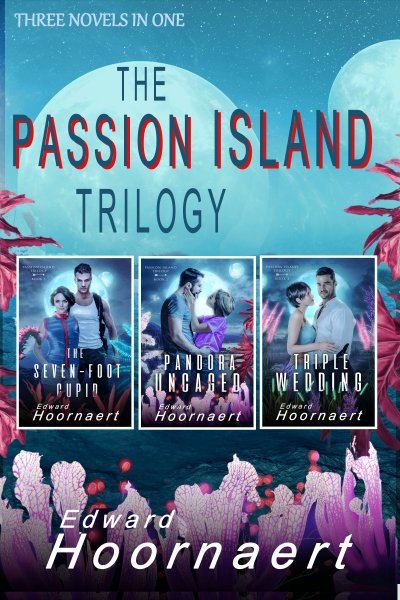 And here’s the blurb for book three:

Teegan Dayle is a driven businesswoman whose company grows houses. When her three estranged sisters plan a triple wedding, she’s determined to show them her life is perfect — so she needs a gorgeous wedding date to wow them.

Sterling, her roommate’s brother, is a handsome loner. When Teegan asks him to be her fake date, he refuses — until he learns that amazing new creatures will be at the wedding. He’s determined to be the first to study them, even if it means pretending to love a woman he doesn’t get along with.

How far will they have to take the pretense? All the way?

Booker is a naïve young Apprentice Cupid whose job is to make a match for Teegan — but not with Sterling. Can he break up matches as well as he makes them?