You MUST go to your sister’s wedding #mfrwhooks

I’m continuing with a hook from the third and final book in the Passion Island trilogy, Triple Wedding.

Teegan was surprised to meet Sterling, her roommate Mercedes’ brother, wearing only a towel. He’ll be staying at her house for a while. That’s one of the book’s main incidents.

The other main event — the inciting event — is that she learns her oldest and youngest sisters will be getting married the same day, which makes her more worried than happy.

“My sister Ember and I have always had this competition going, but there’s no way I can compete with getting married and having a child. If I go to this double wedding—”

“If?” Mercy shook her head vehemently. “No, no, Tee, you have to go. If you don’t, you could drive Rayna away, and she’s the only sister who can stand you.”

Sterling tensed for an explosion. Harsh talk like that might get Mercy—and him—kicked out. He was used to living rough, so he’d be fine even sleeping under the stars, but he had to protect Mercy. He took a deep breath and stood, preparing to defend his sister long and loud.

But Teegan surprised him. Although her eyes were dulled by defeat, she rose with that glorious grace of hers and calmly walked to the wall of windows overlooking Greer Forest. She  folded her arms tightly over her chest. She said nothing.

After several seconds, Teegan went to Mercy’s chair and reached down to give her a hug.

“You’re right,” she said. “Of course you’re right. I have to go to the wedding—but with one condition. You have to agree to do the smoke art for the wedding.”

“Gee, let me think,” Mercy said. “Should I accept the opportunity to perform at a high-profile double wedding with, I’m sure, a correspondingly high fee?”

“Good. If you’re with me, I’ll have a better chance of keeping my happy face stapled in place.” Teegan gave a ladylike sigh as she nodded toward the wall of windows. “I just wish I could take this view with me so they could see that I’m successful, even if I don’t have a man in my life.”

Be sure to visit the other great writers in the Book Hooks blog hop.

Teegan Dayle is a driven businesswoman whose company grows houses. When her three estranged sisters plan a triple wedding, she’s determined to show them her life is perfect — so she needs a gorgeous wedding date to wow them. 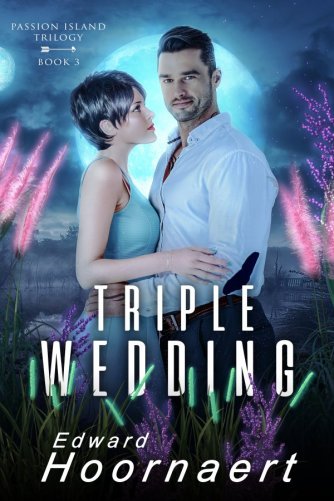 Sterling, her roommate’s brother, is a handsome loner. When Teegan asks him to be her fake date, he refuses — until he learns that amazing new creatures will be at the wedding. He’s determined to be the first to study them, even if it means pretending to love a woman he doesn’t get along with.

How far will they have to take the pretense?

Booker is a naïve young Apprentice Cupid whose job is to make a match for Teegan — but not with Sterling. Can he break up matches as well as he makes them?