Are you ready to mate yet? #mfrwhooks

I’m continuing today with another snippet from my brand new release, The Seven-Foot Cupid — book one in the Passion Island trilogy.

Both Ember and Tyler are Encroachment Officers, or encros, though for different settlements on this colony world. They’re the tough people who handle the hard jobs like exploring, dealing with wild animals, and blazing trails through the wilderness.

Last week, the seven-foot-tall title character burst in on Ember and Tyler.

“Who are you?” she asked the tall man. “What are you doing here? Where’d you come from?”

The giant didn’t answer. He stopped a few feet away and rubbed his hands together in evident glee. “You two have met, I see, and are already hugging. Excellent, excellent. Is my job done?”

“Hugging?” Ember asked. She took a step sideways to put space between her and him. “No, not at all.”

The giant raised his index finger as though to make a point. “But you’re blushing, aren’t you? You can’t hide things like that from me. In some ways, many of them inconsequential, I’m Perfect.”

Frowning, Ember stared at the conceited man. Anyone who proclaimed themselves perfect went down several notches in her estimation. She exchanged another glance with Estrella, who widened his eyes and shrugged.

“My name’s Booker Markevious, and you’re right, I’m not from Passion Island. I ask again, folks. Is my job done?”

Ember frowned. Tyler looked as confused as she was, but the way he pursed his lips and rubbed the cleft in his chin with one finger hinted he was both curious and skeptical. “I suspect you don’t mean the predator.”

“Ember Dayle,” Booker said as though to a young and not very bright child, “are you ready yet to mate with Tyler Estrella?” 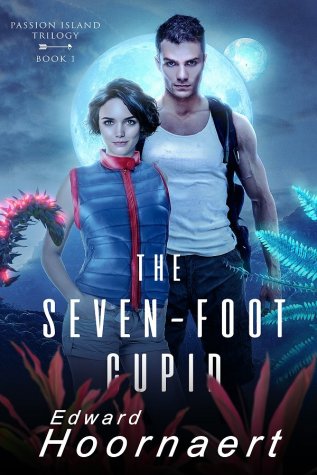 Ember Dayle is a tough lady who prides herself on handling anything her newly colonized planet can throw at her, so after an injury, she’s determined to prove herself again. She gets her chance when ordered to explore a mysterious cave on a wilderness mountain. Until that’s done, the last thing she needs is the distraction of a man.

The Seven-Foot Cupid is now available, so get your copy today