Continuing with a snippet from Ed’s upcoming SFR (science fiction romance to you mystery writers), Pandora Uncaged. Last week, Pandora carries medicine as she entered the room where mysterious mobeave was kept. We continue on from there.

But she chopped her self-congratulations short. The finger fish floated uneaten in the pond, which was unheard of . . . and Moby’s head was still submerged.

It didn’t move a muscle.

Her heart galloped; she hyperventilated; but to her surprise, the unpleasant sensations didn’t keep her from acting. She slapped her hand on the palm plate.

She tore off her gloves and tried again.

She’d never been in the mobeave’s cage — her sister’s boyfriend had nearly lost a leg to the beast — but now she splashed across the thigh-deep pool and lifted its head out of the water. “Please don’t die, please. Ember’ll think I’m still a screwup and she’ll never trust me again and –”

The beast opened its beady eyes.

Effing Feline here again. Ed insists I tell you about the new cover and release date for Pandora Uncaged. I don’t know why any of you would care, but a cat’s gotta do what a cat’s gotta do. 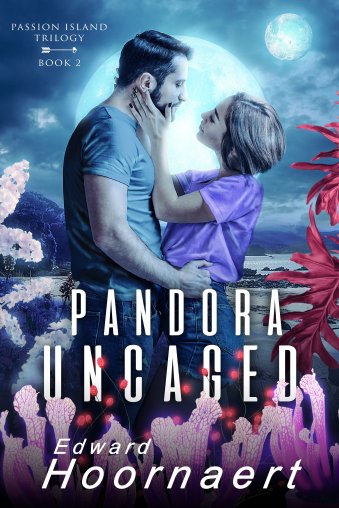