I, Effing Feline, hate dentists. Don’t you? They’re always asking you to open wider and then they have the nerve to poke around where only fresh salmon should dare to go.

But I know someone who loves the dentist, which makes me wonder about his mental health. I’ll tell you who after this message from my sponsor, Pandora Uncaged, a WIP by my pet human.

Pandora Dayle is the acting director of Quak, a veterinary-slash-research facility on a new colony planet. There are lots of beasties learn about. In last week’s snippet, you met some of them, called slytherins, they of the messy eating habits. Today we meet another of the native creatures, and we hear from a second, though we don’t meet it face to face quite yet.

When Pandora Dayle’s vision went black, she breathed a sigh of relief. The midday tropical sun was so ferocious today she wouldn’t have ventured out except for her sacred duty to her patients.

A growl, deep enough to make things on the supply shelf rattle, sounded from the windowless building.

“Good afternoon to you, too, Harry,” she said cheerfully as she flipped on the lights. “Get enough beauty sleep last night?”

The rare Harrison’s Pseudo Reptile rumbled out a huff of breath.

From farther inside the building came a growl . . . more of a stuttering bleat, really, with interesting hints of musical overtones. Pandy gave the ear-to-ear grin that only her beloved animals ever saw. At first, the new animal’s growl had scared her — too much like a beast attempting human speech — but now she appreciated its musical beauty.

When Harry the gator rumbled out another snarl, she chuckled. “I swear, sometimes it seems like you two critters are talking to each other so you won’t feel lonely.”

Effing Feline here again. I’m sorry to tell you (no, I’m not, because the kid pulled my tail once!) that Ed’s youngest grandson actually enjoyed his first trip to the dentist. The kid is, obviously, touched in the upper works. 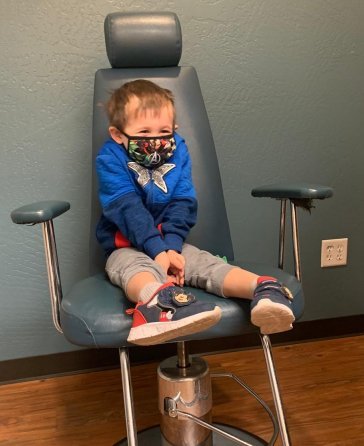 It helps, of course, that he had no cavities.

Be sure to visit your dentist every six months. And while you sit in the waiting room, check out the other great writers in Weekend Writing Warriors and Snippet Sunday.

Pandora Dayle is her family’s black sheep. Ten years after running away from home, she’s rebuilt her self-respect at an isolated facility for saving animals native to her colony’s planet. Her redemption feels as fragile as a dream, but she’ll be okay if nothing traumatic happens.

But when the best friend from her innocent childhood arrives, her insecurities mushroom.

Booker, a naïve Apprentice Cupid for a secret organization, receives his second assignment: get Pandora and Aidan to mate. They’d been close friends, so his strategy is simple: He flies Aidan to her island and orders him to impregnate Pandora.