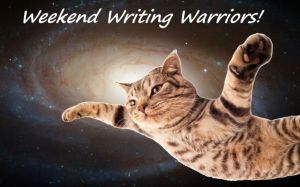 I, Effing Feline, had the most wonderful dream last night. I was on Ed’s lap when he watched a youtube video about the Adams River salmon run and now when close my eyes, I dream of endless salmon. 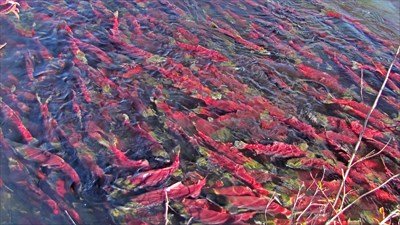 Doesn’t that look scrumptious? I’m in such a hurry to go back to sleep and dream that I’ll tell you only that last week’s clip from Ed’s WIP, The Seven Foot Cupid, ended with Ember Dayle discovering a round hole in the ground.

Someone had drilled a skylight in the ceiling of the cave underfoot — and there was no legitimate reason to create a new skylight unless they wanted to sneak in to steal things or just cause trouble..

As much as she hated the idea, this mystery absolutely must be investigated and fixed. Her job was to go gopher, trusting her rappel vest to slowly lower her to the floor of the cave. The thought of dangling at the end of the vest’s thin cables caused a shudder that nibbled at her composure. She wrapped her arms around her belly and bent at the waist. It took all her willpower not to turn and run.

The last time she’d used a rappel vest, it had failed, pitching her headfirst onto craggy basalt that had broken twenty-one bones, including her skull and a host of facial bones. Dad had assured her, after the fifth surgery, that her face looked even better than before. He wasn’t given to hyperbole, but she was his oldest child, so what else could he say?

Maybe she did look better. Her nose, for example, was shorter and daintier. But she was now a stranger to her own mirror. She’s taught herself to comb her hair without using a mirror, because this reconstructed face wasn’t the same, wasn’t her.

Effing Feline here again, and now I’m mad at Ed. He’s such a spoilsport. He told me that if I went to a salmon run, a grizzly bear would get me, because they’re drawn to the vision of endless salmon, just like me. And grizzlies can weight 600 pounds — I wouldn’t stand a chance.

So much for my nice, innocent dreams of killing salmon! 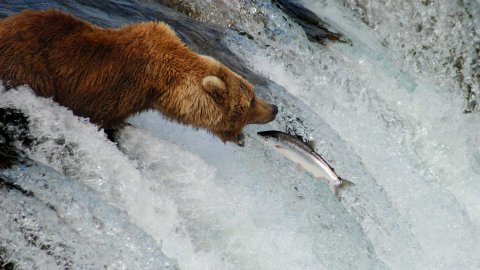 Ember prides herself on handling anything her newly colonized planet can throw at her. After a head injury shakes her confidence, she’s determined to prove herself again. She gets her chance when she’s ordered to explore a mysterious new cave.

Tyler, an explorer from a rival town, is given the same task. Like Ember, he’d been in an accident – – but his entire team died, leaving him drowning in survivor’s guilt. When he meets Ember, he’s drawn not only to her beauty and toughness, but by how well she deals with her accident.

Booker, a naïve Apprentice Cupid for a secret organization, receives his first assignment: get Ember and Tyler together. His strategy: lock them in an abandoned cabin together so they get to know each other.

He doesn’t realize he’s locked them in with . . . something else. Something dangerous. Something no human has ever seen.