His body pressed hers with delicious warmth and intimacy #mfrwhooks

I’m continuing with hooks from one of my pet human’s favorite books, Rescuing Prince Charming. It’s an SFR set in the near future. Dusty and the alien guard have gotten the time bomb out of mankind’s first ever starship. But how can they get rid of it before it explodes?

Their top-secret facility is underground in a mountain on the alien’s island, so she leads the guard to a terrace overlooking the nearby fjord. As he throws the shoe box containing the bomb, she admires his great . . . arm.

The box hit the water with an insignificant splash. She waited.

That was all? This whole blood-pumping thing was a hoax?

But just as disappointment threatened to chill her, the dark waters of the Pacific erupted as though a school of  sea monsters had farted simultaneously. Dusty jerked closer to the stranger. He was warm and alive and his courage took her breath away. Being held by him seemed the most natural thing in the world.

The explosion’s noise, when it reached her a millisecond later, was anticlimactic. If this were a movie, special effects people would’ve added a louder bang and more fireworks. Movie explosions were impressive, not realistic.

“Even though I am…how did you put it? A stupid idiot?” His chuckle took the sting from his words. This easygoing playfulness was something else to like about him. “One of those arrogant Kwadrans you dislike? With an attitude problem, too.”

It finally sank in, all the way to the deepest marrow of her bones, that she wasn’t going to die, really and truly, and in that instant an orgasmic realization flooded her soul: she’d never had so much fun in her whole life as in the last ten minutes. With a joyous laugh, she pressed her cheek against his warm, hard biceps. “You’re an idiot with interesting pickup lines, which makes all the difference. Provided you don’t mind that I’m the daughter of a plumber.”

His body pressed hers with delicious warmth and intimacy. Under any other circumstance, she would’ve objected. Maybe slapped him. After all, she didn’t even know his name.

But this wasn’t the real world; it was reality on steroids, a riotous and astonishing moment outside of time, and his fierce embrace was perfect. She buried her cheek in the soft, clean-smelling twag of his shirt.

Dusty Johnson, a self-styled ordinary, everyday woman, responds with extraordinary heroism when saboteurs try to bomb the prototype of Earth’s first starship. Although she yearns to return to anonymity, that moment of courage propels her ever deeper into dangers that tear the scabs off her dark secrets — and thrust her into the arms of the unattainable man of her dreams. 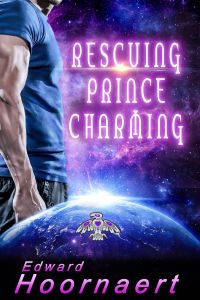 Reese Eaglesbrood, an alien prince, yearns to restore his tattered reputation by guiding the starship project to completion, but his fascination with the unassuming heroine threatens to undermine his fragile authority. Shunning Dusty is necessary, yet unthinkable — and when the saboteurs strike again, she is his only ally against Earth’s most elusive enemies.