Pull down my pants #mfrwhooks

Rescuing Prince Charming is an SFR set in the near future. Native Americans from an alternate Earth have ‘hopped’ their entire island kingdom to our Earth to escape environmental collapse. They’re now the most advanced nation on Earth, and they’ve offered to help us build our first starship. Desdemona (Dusty) Johnson is a technical writer charged with documenting the mammoth undertaking so it can be duplicated in the future.

But before the ship is finished, someone phones in a tip that there’s a time bomb somewhere in the mechanical deck. Dusty knows the unfinished prototype better than most, so she charges on board to search.

Ducking her head because of the low ceiling, she headed toward the engine’s far end. Unexpectedly large equipment had turned a passage into a tunnel just big enough to crawl through; the tunnel led to a closet-sized opening walled with massive wire harnesses. That was where she’d plant a bomb, if she were a saboteur.

She rounded a bank of gauges and saw the tunnel. But a man—or rather, a man’s legs—filled it like a cork in a champagne bottle. Apparently one guard valued duty over death.

Her legs wobbled with relief. “Am I ever glad to see you.”

The tunnel muffled a baritone yelp of surprise. Then: “Take my pants off.”

“An American female,” the guard groaned. “Spirits save me.”

“A Kwadran male with an attitude problem. God save me.”

“My pants are hooked on something, and I can’t reach back to remove them. Pull them down, and hurry. That’s an order.”

“You’re ordering me to strip you?” If she laughed, she’d tumble head-first into hysteria. She held herself to a nervous chuckle, instead.

“I am in no mood for American truculence,” he said impatiently. “I’m staring at an Adidas shoe box jammed between wire harnesses.”

Her chuckle died a gasping death. “The bomb?”

“Pull down my pants!” 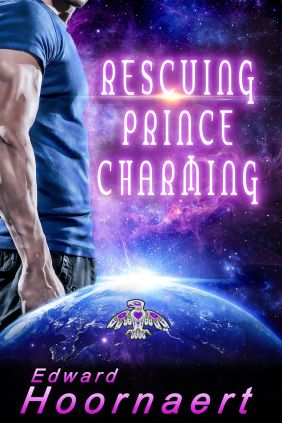 Dusty Johnson, a self-styled ordinary, everyday woman, responds with extraordinary heroism when saboteurs try to bomb the prototype of Earth’s first starship. Although she yearns to return to anonymity, that moment of courage propels her ever deeper into dangers that tear the scabs off her dark secrets — and thrust her into the arms of the unattainable man of her dreams.

Reese Eaglesbrood, an alien prince, yearns to restore his tattered reputation by guiding the starship project to completion, but his fascination with the unassuming heroine threatens to undermine his fragile authority. Shunning Dusty izs necessary, yet unthinkable — and when the saboteurs strike again, she is his only ally against Earth’s most elusive enemies.