The Saint is released from Quarantine, day 1

My 21st book, The Saint of Quarantine Island, was released July 1. That’s Canada Day, the country’s birthday, and choosing that day was no coincidence. This is my most Canadian novel. 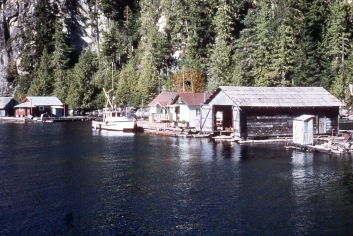 For those who don’t know me, I moved to Arizona over 30 years ago from a log house in the wilds of the Canadian Rockies. But with one exception (Newborn), none of my science books has a Canadian setting.

Until now. The Saint of Quarantine Island takes place on Gilford Island, where I taught in a one-room school when I was fresh out of university. We had no TV, no radio, no stores. There were no cars or roads. The only way in or out was to hitch a ride with a bush pilot in a tiny float plane.

Because there were only a dozen inhabitants of Echo Bay and Gilford is quite a large island, most of the students traveled to school on a school boat. I used the school boat, The Kingcome Queen, as the Janet Davis’s transportation onto the Gilford Island quarantine. Yes, it really existed.

If you want to learn more about Gilford, including pictures, I have a post about it here.

This scene is from Janet Davis’s first day on Gilford Island:

Suddenly, voices sounded from the right, sending the preening seagulls screeching into the air. Janet spun around, as startled as the gulls though she kept herself from screeching.

Remembering the driver’s dire warnings, she hurried as fast as she dared on the rain-slicked walkway until she reached the corner of the house and crouched behind two rusty, greasy metal barrels. Her coat touched a barrel, leaving a dark smear. She brushed ineffectually at the stain then gave up and peeked between the barrels.

The voices were farther away than they’d sounded, so she didn’t think she’d been spotted. A small craft was rounding the cliff at the mouth of the bay. A canoe or skinny rowboat, she guessed.

Eight paddlers strained. The craft knifed through the choppy water.

“Faster!” The man in the bow stood proudly, like a man o’ war’s figurehead, despite the cold spray that showered him with every wave. He cut an imposing figure, with brown hair cascading from under an Australian digger’s hat.

Then answering shouts arose from Janet’s left. She couldn’t see who it was because she didn’t dare emerge from her hiding place. Her colorful jacket would draw attention like a beacon, and the man in that rowboat looked awfully forbidding.

Forbidding, yet fascinating. She peeked out. His craft went straight for the raft. But why?

They were thieves, intent on pillaging her belongings. She had no idea what to do about it, which made her feel worse. This sense of imminent violation-of-self was as close as she ever hoped to come to rape.

The oarsmen sprang onto the raft. A short man with wild red hair slipped and fell then fell again as he tried to rise. The thieves tossed her boxes and suitcases willy-nilly into their craft. Each throw landed on her heart like a blow.

“Please,” she whispered from her hiding place, “don’t do this.”

When shouting on the left intensified, she forgot herself enough to peek in that direction. A dozen men were piling into a pair of rowboats at the pier that jutted from the deepest part of the bay. As they rowed toward the raft, the men shook their arms and cursed the thieves. Most of their words were an angry blur, but they repeated one phrase over and over, like a chant:

One of the pirates, the redhead who’d slipped, looked in her direction. Swallowing hard, she ducked and rested her head against the barrels. Had the man seen her? Her heart pounded in fear of the unknown.

With a vividness that exceeded any reality, she pictured and heard and even smelled the pirates as they abruptly shoved aside their booty in savage eagerness to seize the real prize—her. She imagined them rowing toward the floathouse, racing the men from Echo Bay—and winning, unfortunately. The huge pirate in the digger’s hat would leap from his still-moving boat to where she cowered. As he loomed over her, laughing cruelly, he held up his right arm. Where his hand should be was only a hook—long, curved and sharp. A sudden beam of sunlight somehow pierced the gloom to glint off the metal. Advancing on her, still laughing, he held up the hook. Reached toward her. Snagged the lapel of her coat then ripped it and all her other clothes away in one devastatingly powerful movement.

Then all the pirates fell on her, pummeling and beating until she was a bloody, dead carcass…

But though Janet hunkered for several minutes behind the barrels, crying quietly, she heard no outcry directed her way. Lots of shouting, yes, and thumping as her things were carelessly dropped. But nothing about her.

Her imagination was too darned powerful sometimes.

Again came a cry of pirates. Why wasn’t someone calling nine-one-one?

She pulled her cell phone from her pocket, but of course it showed NO SERVICE.

“Oh, God,” Janet whispered. Again, she rested her back against a barrel, not caring if she got dirty.

She peeked around the barrels. The Echo Bayers wouldn’t reach the raft in time to save her belongings from the pirates. She squeezed her eyes shut, trying to ignore fear that made her shiver.

A gigantic laugh boomed across the water. The pirate’s laugh, surely, the huge, dramatic pirate captain in a digger’s hat. He alone was big enough for such a larger-than-life laugh. Stifling a moan, Janet searched for somewhere to run, but there was nowhere. Fear filled her mouth with salty cotton. The pirates would surely wonder where the owner of the baggage had disappeared to, and when they did—

Heart pounding, Janet peered out. The pirates left the raft just before the first rowboat from Echo Bay arrived. The pirate craft shot away, a greyhound to the Echo Bayers’ dachshunds. The big man standing in the bow looked back, gave another booming laugh then made a florid, mocking bow to his pursuers.

Tears slipped from Janet’s eyes. She wished she were invisible. Wished she were home, safe, warm and dry. She couldn’t stop chewing at her lip, and her bottom was damp from sitting on these drizzle-soaked planks. Now it would be the Echo Bayers turn to wonder about and search for the owner of the baggage. What if she were to stand and call out to them? Would that be safe?

Just as she started to rise, a burst of swearing came from the raft. She ducked back down. Her head throbbed from tension, but no mere painkiller could fix what ailed her.

In honor of release week, the Saint of Quarantine Island is available for the special the pre-sale price of $2.99. Soon, though, it will revert to full price, so don’t wait. Order it now.