Our hero, Quinn, is a free-spirited scamp and an aboriginal American from an alternate earth. As such, his English isn’t nearly as good as he thinks it is. Here he is fleeing from the police in his own inimitable fashion.

As he rounded the corner, he narrowly avoided a tough-looking Merkin almost as large as Squitt, with a baby strapped to his chest. “You know,” the man said, “you’d be a hell of a lot more attractive if—” He broke off when Quinn dodged past.

In avoiding the husband and child, Quinn bumped into the mother. He grabbed her waist to keep her from falling.

“You hurted, madam?” he asked in his best English. She was pretty in a dispirited sort of way, so why not take the time to be polite? After all, Squitt lumbered rather than sprinted.

“Watch where you’re going, jerk,” growled the husband. A body builder, Merkins called men like this. He balled a fist and flexed his biceps—but not even a scowling body builder could look fierce with a baby strapped to his chest.

“You’re Kwadran,” his wife said in a breathless voice, as though enthralled by meeting an alluring but dangerous prison escapee. Fresh off the ferryboat, Quinn guessed.

“Never fear,” he said to the thunder-browed man. “I shall kiss your wife and make her all better.”

And so he did, on the lips, for a count of five—the longest he dared under the circumstances. She tasted of hot dog and mustard. He kept his eyes open to watch the husband as well as the intersection where Squitt would appear, but the woman closed her eyes and kissed him back.

“What the hell you doing to my wife?” The body builder plodded forward, careful of his youthful burden. His care went for naught. The baby howled.

“Your wife, I am kissing her.” Quinn maneuvered back and forth to keep the woman between him and the angry husband. “You kiss her so infrequently you don’t recognize? Such a beautiful babe with such, you know,” he gestured with both hands to indicate her curves, “gets no kisses? Oh, for shame. You should treat her better.”

The wife fought a smile. The husband yelled. The baby cried. And Sergeant Squitt thundered around the corner of Rue Frank Kennedy.

Again Quinn had delayed too long, but it was more fun this way. With an ardent wave to the arguing couple and an airy flutter at the puffing, red-faced Squitt, Quinn ran. 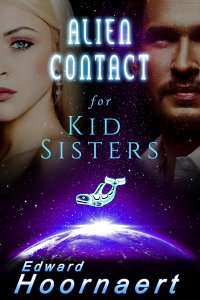