I, Effing Feline, don’t get why the nutcracker is such a big deal. For one thing, after you crack the shell, there’s only a nut inside, not meat or fish, so why bother? For another, nutcrackers aren’t attractive, right? Not pretty!

Alien Contact for an Enhanced Nutcracker is a Christmas novella and the 6th installment of the Alien Contact for Idiots series. Holly Jansen got locked out of her apartment because her roommate made off with her part of the rent money, so no she’s in her car, which won’t start. She and her cat are both cold and miserable, and so when she gets what she thinks is a prank call cellphone call, she snarls swear words.

But is it really a prankster?

“Is this Holly Jansen, the conductor?” The man’s baritone had a light, untraceable accent that was noticeable more in the rhythm of his speech than his pronunciation.

“Uh.” Squeezing her eyes so tightly shut they hurt, she lowered her forehead until it touched the frigid steering wheel. “Yes,” she whispered, “who’s this?”

Please don’t let it be who the phone says it is. I’ll do anything within—or even close to—the bounds of my personal morality.

“My name is Tro Eaglesbrood –”

Holly groaned; she’d used the F-word to the alien king from an alternate Earth, one of the most powerful men in the world? She pounded her forehead against the steering wheel.

“– and my aides were given your name by the Kamloops festival where you conducted a Nutcracker performance for several years, and also Professor Peterson recommends you highly.”

Effing Feline here again. I understand about there being a ballet called the nutcracker, but take a peek at Mrs V’s little tool.

See what I mean? No one could possibly dance with unbending metal legs. The whole thing is preposterous! Yet another example of human inanity! 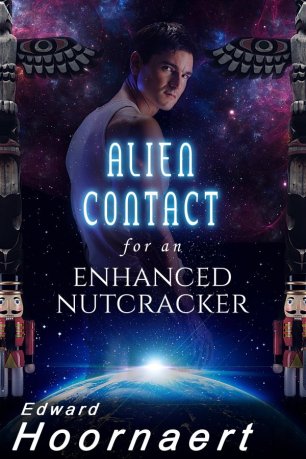 The Nutcracker ballet performed for and by aliens?!?

Holly Jansen, a young orchestra conductor down on her luck, is secretly hired by an alien king to conduct The Nutcracker on Kwadra Island as a Christmas present for his American wife. This big break seems like a Christmas miracle, but after she meets the lead dancer, she wonders if it’s a curse, instead . . .

. . . because the Kwadran queen has secretly ordered superstar dancer Rafael Sekwa to produce a potlatch dance honoring her husband’s ancestors — on the same date, time, and stage as The Nutcracker. The stubborn genius is determined to do so, no matter what, and Holly finds her ambition melting in the face of her growing admiration . . . and love.

Get your copy at:

To help keep myself on track this November, I’m going to try to post my progress. As always, I’m starting out full of vim, vigor, and words. And as always, I’ll probably slow down later.

← Happy Halloween to you!
Is thirty thousand dollars sufficient? #mfrwhooks →