I, Effing Feline, told you the catty truth last week about the French Revolution. That’s not the only famous historical event that actually starred felines rather than humans. Another example — the American Civil War. 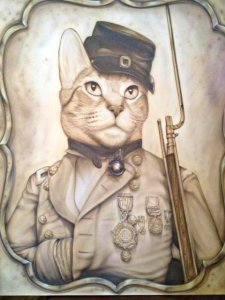 The Civil Wariness of puddy tats is proven by an entire museum devoted to the war’s catfights. I swear on my tail, it’s true! More about this museum after this “meet cute” from our sponsor — Love thy Galactic Enemy.

Lou had been a secretary for a business that was a front for a spy team. The team has abandoned her, trapped and fearful, on a space station orbiting the enemy’s planet — and now an intruder awakens her in the middle of the night by entering her flophouse room. We pick up right after last week’s snippet, which ended: “She was cornered, stupid with sleep, almost nude, and without options except surrender or fight.”

She leaped feet-first off the top bunk, praying for a knockout blow to the head before the man even knew where she was.

Lou picked herself off the floor and looked back. She’d done it, knocked out the intruder even though she’d hit him only a glancing blow. Success!

The unconscious man sprawled on the floor wasn’t the head cop — that was good news.

But there was bad news, too — he had carried a duffle bag. She’d just attacked her new roommate. She’d hurt him, and she hated hurting people. If he had proven himself an enemy, she might not feel such a horrid, painful knot in her belly, but he hadn’t and she did, and what the bloody plark was she going to do about him now?

Effing Feline here again. The cat museum I told you about is Civil War Tails, located in Gettysburg, Pennsylvania, site of the war’s most famous battles. It offers a unique and fun take on history, with many dioramas of battle scenes — all of which feature cats! Over 5000 clay cats! 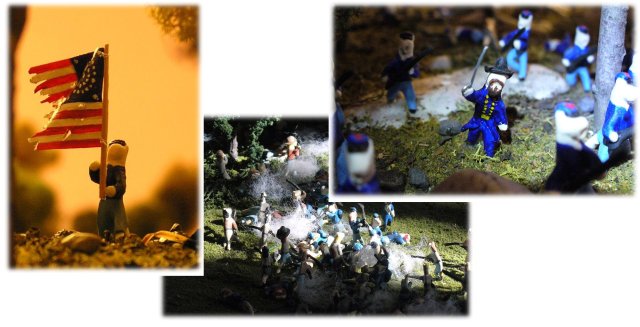 Be sure to visit the other great writers in Weekend Writing Warriors and Snippet Sunday. And and feel free to critique this snippet, as it’s unedited.