I, Effing Feline, told you my greatest ambition awhile back — namely, to become this 35-pound chap: 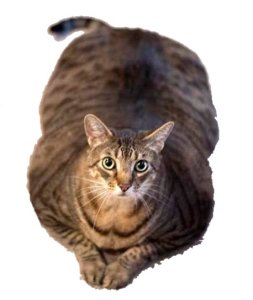 But Ed, dam his writerly flow, took me to the vet. The vet said I’m already too fat. And she put me on a diet!

I’ve outsmarted her, though, and Ed, too. I’ll tell you how after this word from our sponsor — namely, Ed’s untitle (but soon to be officially titled!) sci fi rom WIP. Last week we met a woman currently calling herself Lou walking the corridors of Farflung Space Station:

With each step, Lou feared that someone — maybe the harried woman singing to her crying daughter, or the trio of tough-looking spacers in ship’s uniform — would cry out that her clothes were foreign, or her earrings, or her shoes, though she’d bought everything in this star’s system.

Even if no one did, she couldn’t slither away from the itchy crawly feeling that someone was about to look at her with cloak-and-dagger x-ray vision and see not her naked body, which wouldn’t bother her — though it would, yeah — but her naked soul instead and they’d shriek in rage and if she were lucky they’d call the cops but if she’d abandoned Luck when she fled here from the planet they’d shoot her in the back of the head, and then —

She had to get away from here. Many light years away.

But how, how, how? She was trapped, a mouse scrambling through the perfect mousetrap — a space station. First her own people, coworkers and supposed friends, instigated riots and plague near the mouse’s hole so she had to flee up here, hoping her people would take her home. They hadn’t, though, not yet, and the mouse had no money to pay the starliners that raised rates because of high demand from refugees. So she stayed put for days and days, spending her dwindling cash on food and housing until finally —

See the difference? I shrunk the picture, meaning my ideal doesn’t weight nearly so much. A stroke of genius, eh?

Be sure to visit the other great writers in Weekend Writing Warriors and Snippet Sunday. Feel free to critique this snippet, as it’s unedited.

BTW, Ed is off celebrating his golden wedding anniversary in Canada, so he may not get around to commenting on everyone’s posts as soon as he always does. But be patient! He will get around to you.

Minta, the reserved secretary for a spy team spreading a man-made plague, leaves the planet too late; the team abandons her on the enemy’s space station. To survive, she makes herself useful nursing a gentle, handsome man until Watcher, her elusive contact, can take her home. But to know the enemy is to love him . . .

Finn Shanwing didn’t intend to hide that he’s a cyborg warrior, nor to fall in love with his secretive nurse. By the time he reveals to Minta that she saved an enemy commando, it’s too late for both their hearts. Also too late to escape the wrath of Watcher — half-human, half-machine, and both halves obsessed with her.

← More like a beginning #mfrwhooks
Without you, I’d still have my pants on #mfrwhooks →