Here’s a selection from Escapee, my recently released science fiction romance. Catt Sayer, a civilian pilot. has picked up a lone survivor of an enemy invasion. Captain Hector Dukelsky wants her to fly her airship to the far side of the moon to attack the enemy’s base. After a long, restless night filled with guilt and the kind of heart-to-heart discussion possible only in the dark from opposite sides of the cabin, she realizes that Hector’s dream of fighting a Just War is noble — and she will help him.

Dukelsky had dreamed about her?

She tingled with anticipation all the way down to her core. Yesterday she had stared into his eyes and found, to her shock, a man she trusted. Staring at them now, she distrusted that trust. He was a patroon, or close enough, and she didn’t think she could forgive him for that.

If she swam with him, she would have no idea where the shore lay.

She took a deep breath, the kind she took before jumping into a lagoon, and spoke in a brusque voice. “I’ll take you to Norquay, or die trying. Uh, I guess I shouldn’t have tacked on those last few words. What I’m trying to say is, I’ve always responded to injustice by running away from it, but maybe I should take a stand. You know, fight a righteous war. Good against evil.”

Still holding the cat, he stumbled to the couch and sat. He cocked his head to one side and studied her.

Her nipples were hard for some reason. Blushing again, she hid her chest by crossing her arms. She didn’t know why she felt the need to explain herself for agreeing with him, but she did. Something about this man made her dig deep inside herself.

“A person has to have something to live for,” she said. “For me, it’s been keeping this tub flying and supporting my mother and sister. With no one to carry supplies to or buy fuel from, I won’t be able to do either. I need a new goal in life.”

Be sure to check out the hooks by other great writers in the Book Hooks blog hop. Click here to enter your link and view this Linky Tools list. 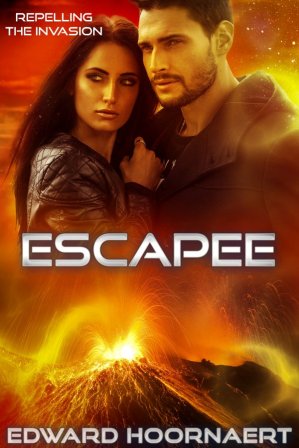 A Disillusioned Soldier
Hector Dukelsky, an upper-class career officer, yearns to fight a righteous war instead of defending corporate interests on Banff, an isolated mining moon torn by volcanoes. That dream seems dead when his entire command is slaughtered while he’s on leave. He returns to smoldering rubble, with no chance to survive let alone strike back at the enemy.

A Pilot with a Chip on Her Shoulder
Catt Sayer, a working-class fugitive from the law, earns a meager income carrying supplies on a decrepit airship, but her hard-won career vanishes when invaders capture Banff. While searching for survivors, she rescues Hector and flies him to safety. But he doesn’t want safety. He wants her to risk her life on a hopeless trek to attack the enemy headquarters.

A Dying Moon
Catt is sure Banff will kill them long before the enemy can, yet she agrees to Hector’s mad scheme, certain he’ll quit after experiencing one of the moon’s eruptions or ferocious storms. But he doesn’t quit, and his noble dream—and his love—conquer her heart. She pits her life and love against Banff’s lethal environment, even though the only reward for success will be the opportunity to face 10,000 enemy warriors.