I, Effing Feline, am going to present evidence of cat’s undeniable superiority in order to encourage you to join the Felinism Movement. Did you know that cats directly inspired some of the most enduring literature in history? Here’s proof that we inspired The Hardy Boys series:

Romance, too. It defies belief that one of the Bennett girls being named ‘Kitty’ was a coincidence. Here’s proof that cats were the patterns for both Mr Darcy and Elizabeth Bennett! — as well as all the Regency romances of Georgette Heyer: 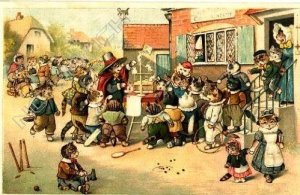 I’m sure cats inspired Mr. Valentine to write his recently released sci fi novel Escapee, too! In the book, enemies from the Proxima star system have invaded the isolated mining moon where Catt Sayer, a civilian pilot, makes her living flying supplies on a decrepit airship. She picks up a lone survivor, Captain Dukelsky, who wants her to fly her airship to the far side of the moon to attack the enemy’s base..

But Catt jettisoned the canon he’d hoped to use to attack the enemy’s base, destroying his plan — and also his hopes and his reason for existing. After initial fury that Catt barely manages to overcome, he falls utterly quiet. She can’t figure out what he’s thinking, but she’s afraid of whatever it is. (FYI, Lancelot is her android co-pilot.)

After two hours of oppressive silence, she’d made the tea as a peace offering, but Dukelsky hadn’t even looked up when she gave it to him. An hour later, the tea was cold.

Dukelsky scares me, Catt typed into the instant message app built into the cockpit’s controls, and sent the message to Lance’s console. He hasn’t budged or said anything for three hours.

Lancelot had been programmed to simulate human expressions, and now his eyebrows rose in simulated amusement. He typed a response without looking at his keyboard: You like him, don’t you, Catt?

Effing Feline here again. I urge you become a card-carrying member of the Felinism movement. Just send your membership fee of $27,539.97 to me. It’s that easy!

Catt Sayer just wants to survive.  The working-class fugitive delivers military supplies on a decrepit airship, but her hard-won livelihood vanishes when invaders overrun her harsh moon. Even worse, an idealistic, upper-class officer wants her to risk her life on a hopeless trek to attack enemy headquarters – manned by 10,000 soldiers.

← If you kill me #mfrwauthor
Were you having the same dream? #mfrwhooks →