This is what rivers look like here in southern Arizona. If you look really closely, you might notice that something’s missing. Go ahead, see if you can spot what’s not there.

The Rillito River in Tucson

What’s missing is . . . water! If you got that right, give yourself two points, a pat on the back and a rub on the tummy at the same time.

The lack of water makes it  a wee bit surprising that a salmon arrived here today. I kid you not. Straight from My Mondo Trading in Victoria, Canada.

I’m not actually sure that this salmon swam all the way here — the post office might have used airplanes and trucks — but its appearance is nonetheless unusual. The sparsity of water, for one thing, and the very different style of local aboriginal art, for another. But it’s here now and ready to take a proud, if dry, place on my Northwest Coast Native Art wall, part of which is shown below. I’ve loved this art form ever since I taught in a one-room school on Gilford Island in British Columbia 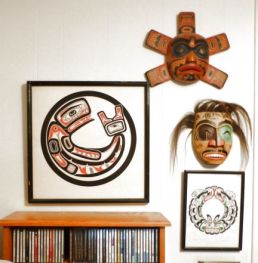 But I suppose this salmon really should be beaver.

Why? Because my soon-to-be released novel, Alien Contact for Runaway Moms, features several members of the Beaver Clan — aboriginal people from the future, who still celebrate the artistic style of their forebears. Er, forebeavers.

Alien Contact for Runaway Moms, which will be released September 1, 2018, is near-future science fiction with not one but two romances at its heart. In it, I’ve indulged my love of NW Coast art by illustrating the e-book. The best thing about the illustrations? They’re free with the purchase of the book!

Here are a few of the illustrations.

The travel poster I designed for the book.

Kwakiutl masks from the author’s collection. No beavers, unfortunately.

Many writers find a photograph that inspires them to describe their heroine. This is NOT the photo that inspired sweet Audra Verhailey. 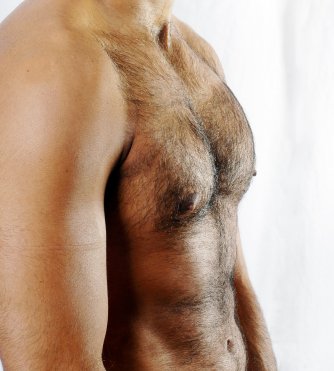 The author’s chest. (In his dreams!) It has nothing to do with NW Coast art, but there’s romance in the book, too. One more reason to buy, eh?

← Effing Feline is back #wewriwa
No sex, understand? #mfrwhooks →