Passing the Torch: Harlan Ellison is now On the Far Side 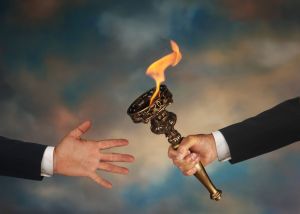 On a day that science fiction master Harlan Ellison passed to the far side, it struck me as appropriate to look back at Mr Ellison’s marvelous career, and forward, to some speculative fiction writers of the future . . . On the Far Side.

The number one thing that always struck me about Ellison’s work was his titles. Here are a few examples:

How I wish I could dream up titles like these!

On the Far Side

The Futuristic, Fantasy, and Paranormal chapter of RWA runs an annual contest called On the Far Side. A number of years ago, after being traditionally published in both Contemporary Romance and Science Fiction, I wanted to blend my two interests and write Science Fiction Romance. I entered my first SFR effort, a near-future romance with the pseudo-Ellisonesque title of Alien Contest for Idiots.

I’m proud to say that the book was an On the Far Side finalist and is now book one in my 5-book Alien Contact for Idiots series. The contest is special to me, so here are this year’s finalists:

Congratulations to all the finalists!