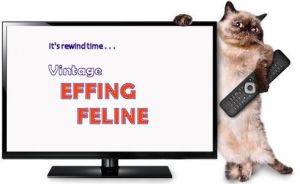 In case you missed him, Mondays now feature some of Effing’s cattiest moments.

Mr. Valentine (aka Edward Hoornaert) is too @!^&# lazy to do his own work and made me, Fart-Fueled Flying Feline, introduce his latest excerpt for the weekend

Now that I’ve done a few of these eight sentence Sunday posts, I, Fart-Fueled Flying Feline (Effing Feline for short), am a star!  That’s what Mr. Valentine, aka Edward Hoornaert, says–and he has no reason to lie, right?

Unless he’s trying to trick me into doing his job. Think that’s possible? Hmm.

No–with my charisma, I am definitely a star!

So I’m gonna write another blog post, which is hard work with paws instead of fingers. In my sublime feline wisdom, I’ve chosen a selection from Mr. V’s upcoming release (March 12, 2015), Alien Contact for Idiots, a near-future science fiction romance.

A duplicate of Vancouver Island mysteriously appears overnight. After Ell Harmon, a Seattle biologist, is sent to investigate, she contacts the not-of-our-earth humans on the island.  Here she is talking on her cellphone with an army colonel:

“Your pilot tells me,” Colonel Wikstrom bellowed in a parade-ground roar, “that you made contact with the aliens twelve minutes ago. Who the hell authorized such a stupid stunt?”

“The President of the United States.” Which was perhaps an exaggeration, but close enough for government work.

When Wikstrom fell silent, Ell enjoyed imagining him do a double-take. “I’m having one of my men check your claim,” he said, “and if you’re lying to me, ma’am…”

When Wikstrom spoke again, his manner had done a crisp about-face. “Have you learned anything yet?” he asked politely.

Until next time, merow. (That’s Cat-talk for “feed me or else.”)