I, Effing Feline, lost not one, not two, but three claws this morning. That may not be important to you, but to me it is a big, big relief. Furthermore, it’s a sign of my clawing prowess!

You see, we cats don’t actually lose claws, only old sheaths of claws, kind of like snakes shedding skins. It’s one of the reasons we use scratching posts — except that I didn’t use my scratching post. That’s for sissies. Like the brave hero that I am, I dared to use the living room couch!

Here’s another snippet from Rescuing Prince Charming. Dusty Johnson, a tech writer working on Earth’s first starship, has helped a Kwadran (a native American from an alternate Earth) find a saboteur’s time bomb. They ran with the bomb to a terrace, where he throws the bomb into the ocean “with the grace and power of an Olympic javelin thrower.”

Huffing, Dusty grabbed the cold, metal railing and looked down. Three long steel posts reached forty yards down to the steep and rocky forest below. If the bomb landed near a post, the blast would bring down the terrace with her on it. But did she run? Nope.

She leaned over the railing and put an arm on the back of her amazing companion. Although she didn’t know his name, there was no one she’d rather stand shoulder-to-shoulder with, facing oblivion, panting in unison, poised on the knife’s edge separating death from life.

Effing Feline here again. I rarely idolize other cats — they can, of course, never be as good as I am — but this puss pulled off a feat that I admire and hereby vow to replicate! 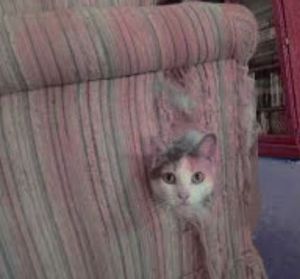 Be sure to visit other writers in the Weekend Writing Warriors and Snippet Sunday.