The unveiling of Rescuing Prince Charming

At last, after months of a placeholder, here’s the real cover of Rescuing Prince Charming. This science fiction romance releases December 4, 2017, but it’s available now for pre-order. 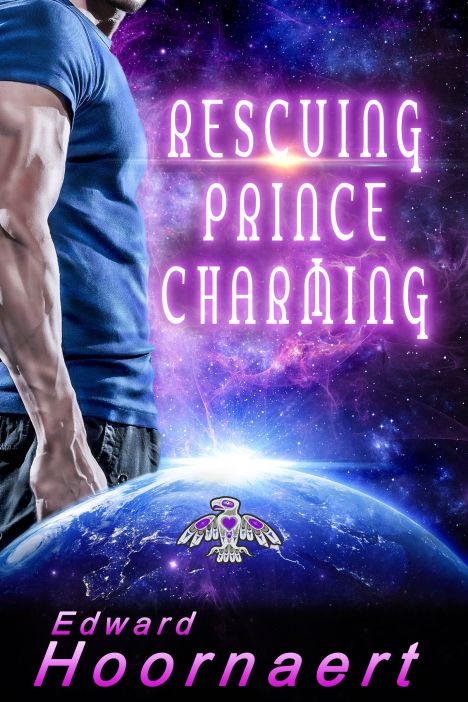 Since this is the fourth book in the Alien Contact for Idiots “universe,” the cover shares the sunrise over Earth image with the other books. This tells readers there’s science fiction inside. The hunky guy, of course, proclaims there’s romance. But then you already knew that.

Footsteps drew Dusty’s attention to the right, where the lane rounded the corner of her house. She flattened against the stone wall, edged to the corner, and peered around it.

It was just Reese — not a shapeshifter — returning from the automatic tailor in charcoal-grey slacks, a heavenly-blue t-shirt, and boots of the type known as Sturdies. Nothing about him proclaimed royalty. She admired his lack of pretension. And his biceps.

Danielle Fine, the editor and cover artist, did her usual excellent job. Thanks, Dani!

Rescuing Prince Charming – In The Beginning

Place: A top-secret, underground facility on a Pacific Northwest island that doesn’t exist…yet.

Dusty Johnson really didn’t want to do this.

She took a deep breath, trying without success to dispel the dread clogging her belly. Some women daydreamed of rescuing princes from dragons. Not her.

Yet here she was, all alone, creeping through the dark guts of the half-built starship, searching for a time bomb about to explode. If the siren ordering evacuation of the research facility had summoned the expected herd of guards, she would’ve offered advice then fled with the rest of the staff. Having come this far, though, she couldn’t leave without branding herself a coward in her own eyes.

And so Dusty wove her way timidly around machinery that smelled of oil and ozone. Nothing was neat and tidy down here; in a prototype, speed and ingenuity trumped meticulous design. Everything was makeshift, a giant kludge sprawling through three-thousand cubic yards. That meant a lot of places for saboteurs to hide a bomb, but only two where technicians wouldn’t discover it in the course of a workday.

The first hiding place was a niche behind the backup life support nexus. Staring into its shadows, she paused. A heroine wouldn’t hesitate, but an ordinary, everyday woman would think twice about squeezing into a dirty cranny while wearing a new, cream-colored chambray skirt with filigree trim.

Maybe she should just walk away.

But there was no one else around to save the ship, and reaching the stars was her dream.

Rescue your own Prince Charming

And get a chance to WIN

There is a cover-reveal-wide giveaway for the cover reveal of Rescuing Prince Charming. These are the prizes you can win:

For a chance to win, enter the rafflecopter drawing!