Effing Feline is here. Or not.

I, Effing Feline, haven’t managed to track down any of my sisters yet, but I’ve discovered some cats who are worthy of being related to me. For example, here is science’s most famous feline and a worthy relative for me, a cat who has a science fiction writer for a pet: Shrodinger’s Cat:

Today, a snippet from an upcoming (December 4, 2017) science fiction romance by my pet human, Mr Valentine: Rescuing Prince Charming. I’m hissed at him for making me introduce this stupid book AGAIN.

You see, he’s been working on the dumb thing on and off since 2015. Do you know how long that is in cat years? No book has ever given him this much trouble, but its third incarnation is FINALLY good enough to be published.

Yeah yeah, sure. We’ll see about that.  But does he think of me? About how hard it is choose fresh, exciting snippets when I’ve done so twice before, back when it was a WIP in smelly diapers?

Hiss, snarl! I don’t think — though how can I be sure? — that I’ve shared the stupid opening of the dumb book, which is now available for pre-order.

Place: A top-secret, underground facility on a Pacific Northwest island that doesn’t exist . . . yet.

Dusty Johnson really didn’t want to do this.

She took a deep breath, trying without success to dispel the dread clogging her belly. Some women daydreamed of rescuing princes from dragons. Not her.

Yet here she was, all alone, creeping through the dark guts of the half-built starship, searching for a time bomb about to explode. If the siren ordering evacuation of the research facility had summoned the expected herd of guards, she would’ve offered advice then fled with the rest of the staff. Having come this far, though, she couldn’t leave without branding herself a coward in her own eyes.

And so she dodged through shadowy machinery that smelled of oil and ozone.

Effing Feline here again. Mrs V scolded me for calling Rescuing Prince Charming dumb and stupid. She says it’s her favorite of the many books Mr V has written. (He forces her to read them all. What a sadist.) She smells so nice and she has the world’s greatest lap, so I agreed to take back what I said.

While a laughing Mrs V chases me around the room, be sure to visit the other Weekend Writing Warriors and Snippet Sunday authors. And now, I gotta run!

* Pawnote: If you aren’t familiar with Schrodinger’s Cat, click for an explanation. And below is a cartoon. 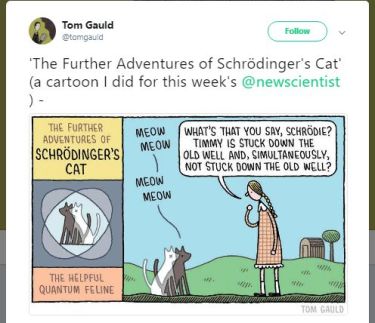