Once a month, the Science Fiction Romance Brigade’s showcase enables the brigade’s authors to highlight snippets from new works, WIPs, cover reveals or other fun things.

My fun thing is fun for me, though I don’t know about anyone else:

Some mornings (not too many, I hope), I wake up with a growl in my throat. Like today. And DON’T tell me to grab a coffee, because I don’t drink the stuff, so quit bugging me, okay?!?

I’m going to share a dark little secret. Don’t tell anyone. It might get me kicked out of SFWA:

I disliked The Lord of the Rings.

Not the movies — they were great, lots of guys died. The books.

The heroes each killed an average of 72,819.7 orcs, while suffering how many casualties? Oh yeah: one. And the book makes clear that Boromir didn’t die because the orcs were good fighters, but as penance for having succumbed to the temptation of taking the ring.

You know the old saying, “Show, don’t tell?” Well, Tolkien tells us that the orcs and their allies are fierce. But what does he show us?

Orcs are as dangerous as bunny rabbits.

When Gandalf was killed by Balrog, I remember cheering out loud. Finally, a worthy villain!

But then Tolkien ruined everything by bringing Gandalf back to life.

I learned my lesson

Back when I read The Lord of the Rings, I had no intention of becoming a writer, yet I learned an important writing lesson that I’ve applied in all my stories:

If the villains are supposed to be more powerful than the heroes, show their power. Don’t just tell us about it.

This leads me to my personal corollary of Show, don’t tell. I sure wish Tolkien had known it:

For villains to be worthy opponents, there must be casualties.

Maybe not deaths, but casualties of some sort. Maybe the casualties won’t even draw blood, yet the potential for pain must be real. If your heroes are battling evil, evil must be powerful:

That’s for you to decide. Read my books. Let me know if I have any bunny rabbits.

The Tribulations of Tompa Lee, on sale during Patty Jansen’s latest cross promotion, is a good place to start. The villains are bloodthirsty aliens who look like miniature tyrannosauruses. And while I’m not JRR Martin, there are casualties. 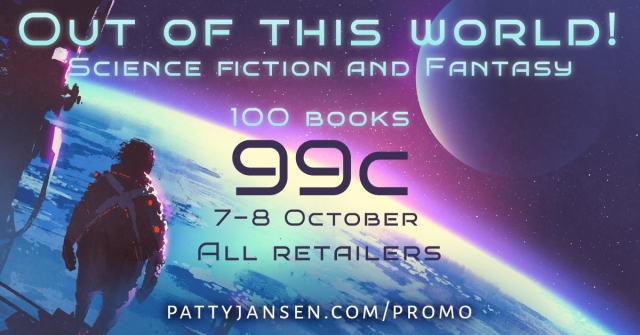 And of course, check out the other great writers taking part in the  Science Fiction Romance Brigade’s showcase.

← First page review: Secrets of Love and War
To Be or Not to Be #mfrwauthor →