Raindrops on roses and whiskers on kittens
these are a few of my favorite things.

The song’s unimportant, but what is important are my favorite things.

And now, a snippet from Ed’s sci fi romance, Escapee. In the middle of a confrontation between army Captain Hector and supply ship captain Catt, we learn why people tolerate the ugly, lizard-like skoots rather than glorious cats.

“—and in any case, what was I supposed to think when the men were so fervently and furtively looking forward to your arrival, Miss Sayer?”

“That’s Captain Sayer to you, and for your information they looked forward because they liked me and because I smuggled goodies for them.”

For a moment, there was silence except for the gentle creaking of the ship in the wind. Her face remained impassive except for a slight tremor of her lips. He wondered if she wished she hadn’t admitted her guilt. Even he regretted the confession, because it would have to go on his report, if they survived this mission.

The skoot lumbered off the couch and edged toward them, its usual exuberance subdued by distress. People put up with skoots because they sympathized with human moods. It nudged his hand, and when that got no response it nudged Sayer’s knee, as though trying to get the two of them to kiss and make up.

To banish the vivid imagery of kissing Sayer, Hector banished all emotion from his voice. “So, you’re a smuggler: liquor or drugs?”

Be sure to visit the other Weekend Writing Warriors and Snippet Sunday authors. 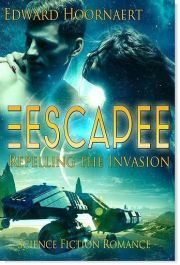 Edward Hoornaert’s romantic space opera, Escapee, continues the saga of the Dukelsky family (begun in The Guardian Angel of Farflung Station). If you like The African Queen and the thrill of underdogs finding love while battling a hostile world, you’ll love Escapee.