Last week I told you how Mrs V got mad at me for tearing up a cushion. I’ve wracked my brain, trying to think what I can do to make it up to her. If I had enough money, I could buy her flowers, but I don’t. All my cash goes to feed my catnip addiction.

Some cats bring dead or dying mice to their pet humans, as an offering of friendship. There are no mice in this house for me to catch — but there are cacti in the backyard where Twiggles the dog has her litter box. Hmm ….

Today, another selection from The Trial of Tompa Lee. Tompa has been  framed for a deadly bombing. With enemy dreadnoughts approaching, the mission’s leader, Ambassador Schneider (the villain of the piece) seeks to appease them by handing Tompa over to alien justice.

In this scene, Schneider is being painfully brusque about telling Tompa she’s about to be abandoned. Pitying her, Dante Roussel takes over and tries to soften the blow.

“While you were recovering in the med casket,” Roussel said gently, “I read every scrap of information we have about you, Ship’s Ward. Manager McShallin wrote complimentary reports about your hard work. He thought you had a fair chance of making full Navy.”

“However,” he continued, “tomorrow, when your head feels better, you will be transported planetside and handed over to the Shons. Ambassador Schneider has given me her personal word of honor that you will receive a fair trial and not become the scapegoat for the current situation.”

Tompa stared brazenly at Roussel, who was staring at Schneider. Good cop, bad cop. He wasn’t on her side at all — and the good cop was the worst, because he was a hypocrite who teased you with hope and used compassion as a weapon.

Effing Feline here again. Twiggles the dog brought me a couple prickly pear cactus pads. Avoiding the cactus’s thorns and poisonous doggy slobber, I put one under Mrs V’s pillow and one under Mr V’s. They’ll be so pleased with me, don’t you think?

For me, stories start with a grain of sand. 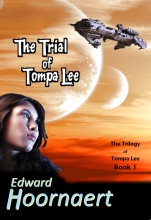 When a rough grain of sand gets caught in an oyster’s shell, the oyster secretes a layer of mother of pearl around the grain, trying to make the sharp edges less annoying. Then another layer, and another. Out of a nasty, unlovely annoyance, a beautiful pearl is born.

Like sand trapped in an oyster’s shell, my stories starts with a tiny kernel. Mental sand, if you will. The kernel rubs against my imagination, reminding me of its presence. With little more conscious volition than an oyster, I add details and characters and incidents. If I’m lucky, I add enough layers that a story is born.

The kernel for The Trial of Tompa Lee came to me in a dream. But the dream, or at least what I remember of it, bears no more resemblance to the published book than a grain of sand does to a pearl.