I, Effing Feline, got excited when Ed Hoornaert, my pet human, said today was the start of a new year. Wow, I thought. None of the same old same old cat food — fresh salmon every day. A new bed — with a built-in radiator. And most importantly, no more Twiggles the dog! 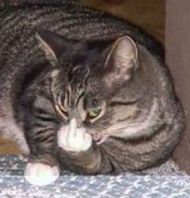 But no.  To dumb humans, ‘New Year’ means nothing more than flipping a calendar page.  It’s enough to make a cat yawn with boredom! If Mr Valentine (as Ed is known) would only let me out of the house, I’d catch a bird and flip that at him.

Oh well.  A new calendar page,  a new book from which I pull snippets. Ed recently signed a contract for a third book in his Repelling the Invasion series.  Constellation XXI is set on two spaceships, one of which is eponymous. (I know some fancy words, don’t I?)

Have you heard about that idiot, Dukelsky?  On her first solo flight — the first one! — the dumb Cherry ruined one of our newest, most expensive tugships.

That’s what people would say, and the truth wouldn’t dent their gossip.

“No,” Sienna Dukelsky growled into the darkness that had  invaded every nook of the ship, a blackness blacker than outer space because there were no stars.  The overhead lights on the bridge were dead; emergency power had failed; no glimmers came from the open hatch leading to the rest of the ship; screens and readouts gave no information about speed or course or possible collisions with space junk.  The vibrations she’d learned to ignore no longer teased her feet with a faint reassurance of technological life.

Although she’d done nothing to cause the spaceship to shut down, she was the captain.  She was responsible.

The first two books in the Repelling the Invasion series are:

Farflung Space Station is the first line of defense against vicious space pirates. They haven’t counted on Sandrina, who knows so many of Farflung’s secrets that she’s the most powerful person on the entire station…though nobody knows it yet.

The African Queen in outer space

Catt Sayer just wants to survive.  The working-class fugitive delivers military supplies on her decrepit airship, but her hard-won livelihood vanishes when invaders overrun her harsh moon. Now an idealistic, upper-class officer wants her to risk her life on a hopeless voyage to attack enemy headquarters – manned by 10,000 soldiers.