I have a new science fiction romance coming available around the end of October, and I’m particularly happy with it. I enjoy stories with action and the stirrings of love and, especially, with characters who have psychological depth.

Before you scream in horror at the thought of a boring literary character study, my main character, Jo Beaverpaw, is a Native American super-heroine in the making.  She’s similar to Schwartzenegger’s character in The Terminator: an assassin from the future with superior speed, coordination, and healing power.

There’s one tiny difference. Jo is a petite female who knows how to kill but yearns to learn how to love and become human.

Before showing you the full cover, I’m going to highlight certain features. Here’s the first element:

A small element on the cover hints at something important about the book.

At left is a Northwest Coast Indian representation of a salmon leaping upstream. Jo Beaverpaw’s people are Native Americans from an alternate reality who’ve used advanced technology to settle on our Earth.

I’d be wary of using a real Kwakiutl as a main character, but I’m familiar enough with the tribe to make a semi-intelligent guess what they might be like in the alternate history I constructed.

In Newborn, I also explore the effect on our reality’s downtrodden natives when their relatives are suddenly the most advanced people on Earth. I had fun with that!

The main cover element shows Jo curled in a fetal position inside a cosmic egg. Jo is born in a forest clearing fully grown, well-armed, and eager to tackle her Destiny — to kill her alien nation’s most-wanted fugitive.

That’s a tricky theme to capture in an image, but cover artist Danielle Fine did a superb job.

Finally, here is the complete cover. 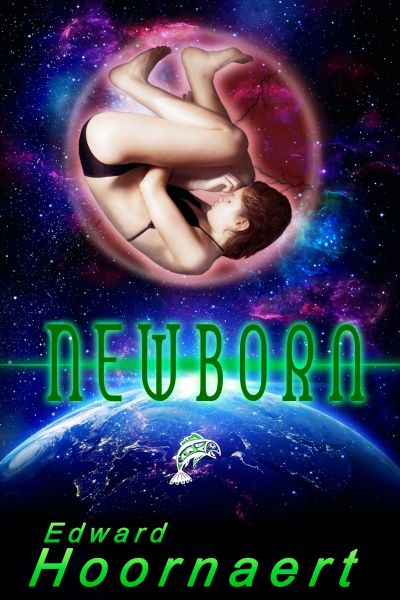 Interested in reviewing an advanced release copy of Newborn?

Be sure to check out the other great writers taking part in the SFR Brigade Showcase.

← Effing Feline teases a dog
Grammar is credibility. (So is spelling!) →