Top Ten Tuesdays are hosted by The Broke and The Bookish.  The blog hop features lists related to all things bookish–characters, authors, titles, and favorites. They’re an excellent way to find new interesting books on a variety of topics, and to connect with bloggers who love the books you do. 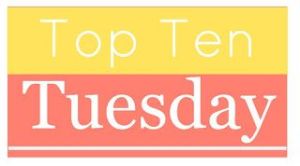 This week’s theme is a TV topic in honor of Fall TV. I’ve chosen science fiction books that have been produced for the small screen. No movies allowed!

Be sure to check out some of the other fascinating lists.