The Science Fiction Romance Brigade‘s blog hop is back, bringing you great reads.

Great prizes, too! $50 gift cards, ebook bundles, and copies of my own Alien Contact for Idiots. More on the prizes at the end of this blog post.

Travel Posters for My Worlds

Whenever I have a new release, I design a travel poster for the book’s science fiction worlds. Seeing that I’ve had two new releases since April, I’m honoring of the SFR Brigade’s blog hop with my travel posters for Escapee and Future Love.

Not the spectacular mountain park in Canada. Not the seaside town in Scotland, either.

No, this Banff is a distant moon, the hellish but mineral-rich setting for Escapee.

The African Queen in outer space

Catt Sayer just wants to survive.  The working-class fugitive delivers military supplies on her decrepit airship, but her hard-won livelihood vanishes when invaders overrun her harsh moon. If that isn’t bad enough, an idealistic, upper-class officer wants her to risk her life on a hopeless voyage to attack enemy headquarters – manned by 10,000 soldiers.

Explore the Afterlife … at your peril 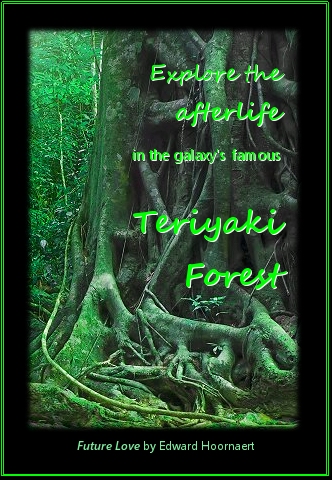 The teriyaki vine forest is setting for one of the short stories in Future Love.

Love is gonna get tougher and trickier

A spaceman wins the woman of his dreams … but it’s too late. A crook invents a new form of pornography … but it teaches him about love, not sex. A man pursues his beloved beyond death … but finds only the evil in his own heart.

The short stories in Edward Hoornaert’s Future Love probe how the future will make today’s romance seem simple and tame by comparison.  Think that’s not possible?  You have much to learn…

Go ahead, decide which world you’d like to visit. Unlike Virgin Galactic, which charges millions, all the trip will cost you is the price of a book.

For more otherworldly trips, see the other great writers in the SFR Brigade blog hop.

Ahem.  What about those prizes?

There are several ways to win.

First, anyone who joins Ed’s World during this blog hop wins an electronic copy of Ed’s thought provoking and hilarious Alien Contact for Idiots. Ed’s World is an occasional newsletter featuring giveaways, information, new releases, and other fun.

And don’t forget to visit the other worlds from other great writers!