Valentine’s Goodies on sale
(and a free)

This is a very special week for Mr Valentine, aka Ed Hoornaert. Did you know I’m a certifiable Harlequin hero, as well as an author? I inspired a book by NYT bestselling author Vicki Lewis Thompson.

In honor of this special week, I’ll be highlighting some great romance books by friends from the Futuristic, Fantasy, and Paranormal branch of the RWA. Check back everyday this week for more great books by your favorite authors and your favorites-to-be.

Best of all, the books are only 99 cents or less — and you can get a reward, free for the asking. For details on the reward, see the end of this post.

When American Indians from the future move their entire island nation to our Earth, Ell Harmon makes the first alien contact. The take-charge Seattle biologist has yearned to find intelligent aliens, and her dream comes true when she meets Prince Tro Eaglesbrood.

Ell and Tro are quarantined together, while the fearful world wonders whether the newcomers are friends or foes, neighbors or conquerors. Ell knows Tro is honorable and Kwadrans are peaceful … but how to convince the world?

They broadcast a show, which she flippantly titles Alien Contact for Idiots. Every day, Ell interviews Tro and tries to humanize Kwadrans. The show is wildly popular, and the romance developing on-screen between Ell and Tro reassures the world. If a smart woman like her can fall for a Kwadran, they must not be monsters, right?

But Tro’s duty lies with his people, and soon that duty threatens not only the show but Ell’s heart — as well as the peace and survival of our world.

Deceit and Lies, by A.K. Michaels 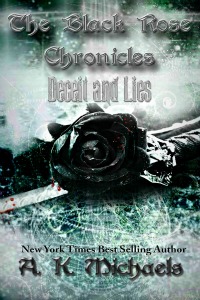 The Black Rose is a highly trained assassin, she kills with impunity if the target deserves such a sentence. Unfortunately, far too many do. In a post-apocalyptic world her services are in dire need.

Vampires, Werewolves, Demons, and a host of other species now run free upon the earth and some of them were downright evil. She tasks herself with dealing with wrongdoers whenever she can. She is strong, fearless and powerful. An anomaly, probably the only Witch/Wolf hybrid left alive. She shields herself from detection. If anyone knew she has Witch DNA they would all come after her and she couldn’t take such a horde on and live.

The Black Rose will strike again for the good of humanity. It’s what she believes she’s been born to do and she will tackle this as she does all of her missions; with deadly intent. There’d be no difference this time. Would there? Or is the dangerous Vampire, Cassius Allarde, not all that he seems?

Come follow Rose’s journey as she fights to find out the truth. About the Demon, the Vampire and the Witch hunt that destroyed most of her kind.

And Now the Reward

All you have to do is leave a comment, any comment, on two of this week’s Valentine Sale posts and you will receive a free electronic copy of Alien Contact for Kid Sisters, book two in the Alien Contact for Idiots series.  So bookmark this blog and stop back often!