Recipe for a Book

Recipe for a Book

People often ask if there’s a formula for writing a book. The answer: Nope — no formula. Sorry.

But for one of my books, The Guardian Angel of Farflung Station, I have the next best thing — a recipe.  If you promise not to tell anyone, I’ll let you in on my secrets.

But I also love Guardian Angel because of how easily it came together. I put together ingredient A with ingredients B and C, mixed well, added some secret sauce et voila, c’est magnifique !

I couldn’t sleep one night, so I watched a  movie on TV — Amelie, a French comedy about a hapless woman who goes around trying to do anonymous good deeds. She struck me as so fascinating and admirable that I simply had to write a character like her.

Thus Sandrina was born. A childhood trauma involving space pirates left her unable to speak, making her life as a homeless orphan on Farflung Space Station both impoverished and lonely. But she’s SMART! (Yes, in capital letters.) She teaches herself to resurrect an abandoned section of the station and then taps into the station’s computers. In secret, she becomes the most powerful of the station’s 3000 inhabitants.

What does she do with her power? She performs anonymous good deeds. Gotta admire someone like that.

Sandrina is the polar opposite of the stereotypical kick-ass heroine (K.A.H.) so beloved in science fiction romance. What the heck — I decided to add a K.A.H. as Sandrina’s foil.

And so Princess Lockey was born. She’s everything Sandrina isn’t. Gorgeous. Rich. Self-confident. Full of wisecracks. And tough — so tough she can beat bigger, more experienced men in any known martial arts.

In one way, though, Lockey is like Sandrina. They both have their hearts set on the same man.

Duke Dukelsky was born. Since my female leads are vivid and distinctive, I felt that the romantic interest should be earnest, even serious.

Duke is the head of station security, handsome, new to his job but good at it. For too long, he has lived up to his reputation as the black sheep of a distinguished military family. Now he’s determined to prove himself worthy.

And he isn’t just a pretty face. Underneath the testosterone, he’s wise enough to appreciate Sandrina’s silent goodness just as much as Lockey’s surface flash. This gives him the depth to counterbalance the rival women’s flamboyance. 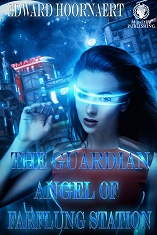 The short length of a novella means less space for world-building, so I opted for bad guys whom readers could understand without pages of explanation … although we learn eventually that these ‘space pirates’ aren’t what they seem to be.

When a hundred space pirates seize control of Farflung Station, Duke leads a two-woman army to liberate the station. Plenty of action ensues, during which Sandrina and Lockey constantly vie for Duke’s affection. A grand time is had by all.

Except, of course, by the pirates.

How to Get your very own Guardian Angel

The Guardian Angel of Farflung Station is available wherever fine e-books are sold, including:

Read chapter one of Guardian Angel for free.

And be sure to check out the other great writers involved in the SFR Brigade Showcase.

← The Bear at the Door
Effing Feline admires disobedience →