The Bear at the Door

My wife, way back when

Judi was browning Swedish meatballs on the stove, filling the air with the tempting aroma of frying meat and the mouthwatering promise of one of my favorite meals.  I forget what else was for dinner, because this was several decades ago. Mashed potatoes?  Doesn’t matter, really.

What matters is that THEN—

(You may not believe it, but it really happened.)

THEN, with a thump and the rasp of tearing wood, a bear scratched at our door.

Now, that kitchen door didn’t latch unless you closed it. Hard. And if the door wasn’t latched, a vigorous shove would open it.

A vigorous human shove. A half-hearted shove from a full-grown black bear would surely do the trick.

Funny, in a non-humorous way, the flimsy little fulcrums on which life’s big moments can turn.

This is a true story, by the way. If I’d made it up, I would’ve devised a more dramatic ending.  You know, like I killed the bear with my bare hands, because I’m such a formidable guy.

Back then we lived on the outskirts of a small British Columbia town of 1500. I say ‘small town,’ but it was the largest settlement for 75 miles in all directions, surrounded by wilderness.  Surrounded by bears, too, though they didn’t usually wander so close in.

Our pooch Lion, outside the house the bear visited. This picture was taken in the month of APRIL, believe it or not. It snows just a wee little bit in the BC mountains.

But that summer we’d been plagued by a bear getting into our garbage and making a mess. Because of trees, a hill, and distance, there weren’t any neighbors close enough to see, and I never heard of the bear bothering anyone else.

We kept a close watch on our dog, Lion.  You see, dogs and bears don’t get along. Dogs bark, trying to scare off the bear, and when that doesn’t work (bears aren’t afraid of dogs), the dog runs back to you, looking for protection from the angry, four-hundred-pound bear chasing it.

By the way, don’t believe that ‘man’s best friend’ garbage. If dogs really were man’s best friend, they’d let the bears eat them rather than lead the bear straight to their masters. 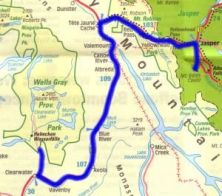 But I malign poor Lion. She wasn’t to blame for this particular bear story. She merely urged me, with frantic barks, to do something.

I was a teacher working for the summer as a part-time naturalist in Wells Gray Provincial Park, a huge tract of forest, mountains, extinct volcanoes, and waterfalls. For some reason, probably scheduling, I was talking on the phone to Trevor Goward, the park ranger, when the bear came a-visiting.

“Trevor,” I said, or something similar, “there’s a bear at my door.”

“Yeah, right,” he said, or something similar.

“Screech,” Judi said in an oddly calm voice as she fled into the living room. Lion, her voice far from calm, barked madly at her heels. Ordinarily, my intrepid wife wouldn’t have fled from a mere bear (we were pretty used to them) but she was expecting our first child at the time.

I tried to hang up the phone, missed—and then went back to hang it up properly.  Dumb of me, I know.  I was terrified to go to the door, afraid maybe the bear was a Jehovah’s Witness, but was also terrified to wait and see if it could get in.  Didn’t want a bunch of Watchtowers littering the place.

But with my wife watching, what else could I do?  She expected me to deal with all spiders, mice, and bears.  It was in our marriage vows.

So I screwed up my courage, ignored my pounding heart, and hurried to the door, where the meatballs still smelled great.  Bracing myself against a kitchen cabinet, I kicked the doorknob and pressed it as hard as I could.

I didn’t hear the latch click, maybe because of my pounding heart.  Or the dog.  Or maybe it was already latched, and all our terror was for naught.

One thing’s for certain, though.  That bear was nothing but a big bully who turned tail when I pounded the door.  It stopped fifty feet away and stared back at me, wondering if I had enough meat on me to be worth the bother.  Then it ambled into the woods.

I tried to talk Trevor into coming into town to see the scratch marks on our kitchen door.  All he said was, “Yeah, right.”  Or something similar.

Trevor Goward isn’t just a great guy. In the years since the bear, he’s become an authority about the BC central interior. Literally an authority; he’s written books, like this one about Wells Gray Park.

← Top Ten Tuesday — If you like The Martian, you’ll love …
Recipe for a Book →