Bookstores I loved (past tense)

Is any kind of store more important to a writer than bookstores? That’s why I’m writing this series on bookstores I love.

Today I’m taking a look back at a couple of long-gone bookstores that live on in my memory, one in Chicago and another in Vancouver.  I haunted them (not at the same time, obviously) in my late teens and early twenties.

Kroch and Brentano’s in Chicago

Back when I was an undergrad at the University of Chicago, Kroch and Brentano’s was one of two big reasons to visit the Loop.

My other favorite was the Chicago Symphony, which I eventually stopped going to because it hurt too much. You see, I wanted so badly to play like Ray Still, the symphony’s world-famous oboist. And I suppose I did.  Play so badly, I mean. For years, I’d get in the mood to practice by playing the opening of the old Reiner/CSO recording of Schubert’s Unfinished Symphony, featuring some of the most divine playing I’ve ever heard.

Back to Kroch’s. Located under the noisy El train tracks, it billed itself as the world’s largest bookstore.  What I remember most was its glorious selection of science-fiction paperbacks, which were my main reading material back then.

Last night I started re-reading a book, now falling apart, that I bought at Kroch’s: Philip Jose Farmer’s The Day of Timestop. 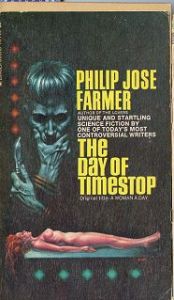 Science fiction was asexual back then, but Farmer had a racy reputation and the lurid book cover really played up his reputation. As I headed back to the dorm, reading my prized new possession on the Illinois Central commuter train, I met and sat with a friend from the university’s orchestra — a clarinetist I had a crush on. When Jan saw the cover, she asked what sort of filth I was reading. End of my hopes!

As I read on later, I discovered that the lurid scene on the cover was an autopsy, not a rape and mutilation murder. Too late, though, to convince Jan of that.

The Book Bin in Vancouver

Less than a week after graduating from UC, I got married and moved to Vancouver, where Judi and I (not, you’ll notice Jan and I) loved a huge used bookstore on Granville Street near the city centre. Would you believe I can’t find a thing about Book Bin on the Web? Sheesh–it’s only been gone thirty years or so!

I was still into science fiction almost exclusively. At one point, we moved up the coast to teach at a one-room school accessed only by float plane; the students came to school on a school boat. Since we were isolated for months at a time, we went to the Book Bin to stock up on reading materials. I still have several of those great old books. Here are a few of them.

As I said, the Book Bin is long gone, except in my memory. With the way Vancouver is growing, I suppose it was inevitable that something like the following monstrosity is slated to be built near the bookstore’s (formerly grungy, now hip) location. (Picture courtesy CBC News.) 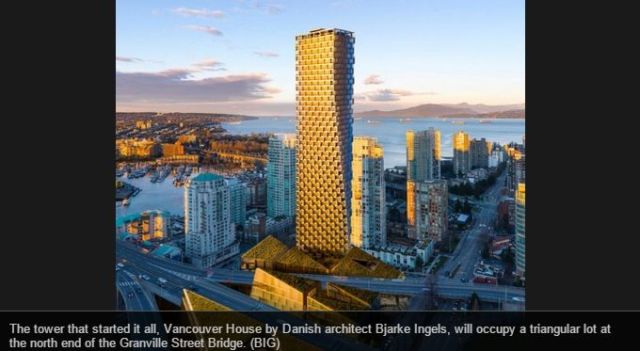 Personally, I’d rather have the Book Bin back!

Check out other Bookstores I Love. What about you? What bookstores do you love?

← Top Ten Fictional Heroines
Effing Feline has something in his eye →