I, Effing Feline, am on my very best behavior today, because I’m still humiliated by having a stupid, wagging, slobbering, overeager dog fill in for me last week. ‘Humble’ is hard for a cat, so  lion with me.

I humbly beg you, dearest gentle readers, to peruse this selection from Mr. Valentine’s newest release, Alien Contact for Kid Sisters, and then visit all the other outstanding writers who share snippets on Eight (to Ten) Sentence Sunday.  Please please please!

Background: Marianne, the queen’s kid sister, is in a tunnel with a fake Royal Guardian named Quinn who is either protecting or kidnapping her — he hasn’t decided which. Here we meet the third member of the troop that will romp through the deserted underground cities: Lady Delphina Eaglesbrood, aka Elfy. 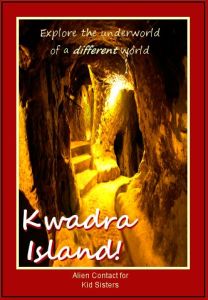 A travel poster for the underground cities of Kwadra Island

Quinn pounced around the corner while the pouncing was good. Just like a real hero, he grabbed the intruder around the chest, trapping his arms, and put the knife to his throat.

Uh, no. Not his throat: her throat.

It was a girl, maybe ten or eleven, with straight, black Kwadran hair that smelled of shampoo. He hoped Marianne couldn’t see him holding a knife on a little kid wearing pajamas and a robe with Hello Kitty appliqués.

He released her and opened his mouth to ask if he’d hurt her — but she kicked backward and whacked his shin with the heel of her sturdy shoes. Yipping in outraged pain, Quinn dropped the knife and hopped backward on one foot.

He didn’t see her next kick, aimed at his crotch, until it was too late.

Effing Feline again. Purrty please with a hairball on top — check out the other great snippets from the Weekend Writing Warriors!