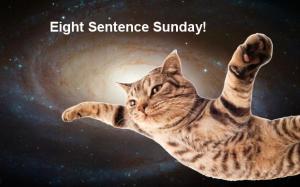 My nickname is Effing Feline. Mr. Valentine (aka Edward Hoornaert) tells me that ‘effing’ has naughty connotations. Like I care, right? I’m a cat, after all. I don’t care what anyone thinks.

A duplicate of Vancouver Island mysteriously appears overnight. After Ell Harmon, a Seattle biologist, is sent to investigate, she contacts the not-of-our-earth humans on the island.  Here she talks on her cellphone with an army colonel, admitting a mistake while the aliens’ leader, Tro Eaglesbrood, looks on:

“I made a dumb mistake–I shook hands with two Kwadrans, and you know what that means.”

“An exchange of germs.” She turned to Tro and said, “Do you know what germs are?”

“Of course I do,” Wikstrom said. “Just because I’m in the army doesn’t mean I’m—”

Until next time, purr. (That’s Iranian-cat-talk for arrogant satisfaction.)

Read Effing’s previous post. And then be sure to check out the other writers
in the  weekend writing warriors’ Eight Sentence Sunday.

Alien Contact for Idiots is available for pre-order on Amazon–at a special price of just 99c US.
Get it now, because the price goes up after release day, March 12!