My good friend Celia Breslin, author of Haven, tagged me in the Meet My Characters Blog Hop.

Unfortunately I’m busy working on the re-release of my science fiction novel The Midas Rush (a new paperback edition is due out next week ), and so I’m turning this blog over to Midas Rush’s reluctant hero, Tresky Buffrum.

So take it away, Tresky. Answer all the good folks’ question honestly and thoroughly.

Thanks, Mr. Valentine. Sorry, gentle readers, but Mr. V. is busy right now watching a baseball game. He said he’s working, but don’t believe him, eh? He’s right, though, that a second edition of Midas Rush is indeed in the works, along with a dramatic new cover.

I can’t hope to fill my author’s shoes—he has big feet—but I’ll answer your questions to the best of my humble ability. Be patient with me, please.  I’m not a baseball-loving, oboe-playing, multi-published author like some people.  I’m just innocent, naive, and, well … nice.  But dang, with all I’m going through I’m not sure I can stay that way. 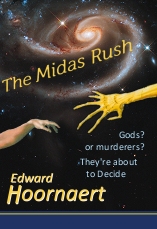 Q: Are you fictional or a historic person?

Tresky: I’m from the future, so I can’t be historic, eh?

As for being fictional–absolutely not.  I’m real, I assure you.  I mean, I have emotions, I made friends with a dangerous alien, I married a woman the day after I met her. Could all that have happened if I wasn’t real?  Course not!

Q: When and where is the story set?

Tresky: The story is set right here, of course.

What do you mean, where’s here?  On planet Jones, of course. I thought everybody, even Offworlders, heard of Jones after folks found some aliens transformed into gold. I guess the transmutation thingie is impossible–but it happened.  The discovery has caused an interplanetary gold rush.

The golden statues are just Sloths, though–that’s what we call our intelligent but slow-moving native aliens–so I don’t see what the big deal is.

Q: What should we know about you?

Tresky: Well, I’m a Gasparre tribesman. Like most Gasparres, I was a shepherd, but I wanted more.  I wanted to taste the excitement of the Midas Rush.  I know, I know; us male Gasparres are always henpecked and timid.  Not me, though.  I wanted adventure.

What I got, however, is a mysterious wife who insists on remaining chaste–and that’s hard on a 22-year-old virgin like me.  Now Ebbril has dragged me off on the long, dangerous trek to the Midas Crater.  I can’t help the feeling that Ebbril’s up to no good, and that her trouble has to do with Sloths.  Maybe I shoulda stuck to tending sheep.

Q: What is the main conflict? What messes up your life?

Tresky: Woman trouble, obviously.  Not just my wife, either.  There’s this gorgeous, really nice policewoman I wish I’d met before Ebbril.  She–the policewoman, I mean–yearns to sleep with me even though my wife doesn’t.  But I won’t do that.  Not right, no matter how badly Ebbril treats me.

The even bigger trouble, though, is the Sloths.  Some of them are thinking about exterminating all the humans here on Jones. If that isn’t bad enough, all sorts of unsavory, murderous, and downright crazy humans from off-world are traveling on the caravan with us to the Midas Crater.  I dunno what they’re up to, but they’re even more dangerous than the Sloths.

Q: What is your personal goal?

Tresky: Got more than one goal, even if I am just a naive shepherd.

First, I want to love my wife so much (and ignore my feelings for the policewoman) that Ebbril will love me back.  She already does, kinda.  A little.  I think.

Second, I want to bridge the chasm between Sloths and humans.  I know, I know, that’s danged ambitious for an ignorant Gasparre shepherd–but I’ve made friends with a Sloth and nobody’s ever done that before.  Thing is, everyone else wants to fight, and if my Sloth friend and I can’t figure something out, fast, I’m afraid things are gonna end real badly.

Q: Is Midas Rush published, and where can we read more about it?

Tresky: Yep, it’s available right now in ebook formats. A new and improved second edition will be available soon, at which time you’ll be able to buy it in trade paperback. I really hope you do.  I need all the folks rooting for me I can get. You can buy The Midas Rush at these fine booksellers:

Most important of all

Check out the fine writers Mr. V has tagged to follow him in this blog hop: