The SFR Brigade Presents a Triumph 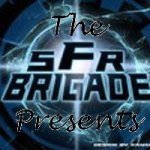 If you haven’t checked out the Science Fiction Romance Brigade, you really should. This group of writers contains some of the major voices in women’s science fiction, including Catherine Asaro and Linnea Sinclair.

This week, several brigadiers are sharing short selections from their work. Below is a snippet from The Triumph of Tompa Lee, which will be available on July 29.

A very short setup: Tompa Lee, our underdog heroine, is trying to rescue her husband and best friend from the clutches of a bounty hunter who’s used them as bait to lure Tompa to an alien city. Tompa accidentally sets fire to the building where the bounty hunter sleeps. You’d think a raging fire would do in even a huntress wearing battle armor…

As one, they fled, leaving Tompa alone to face the blackened ruins. Was something moving in there? Maybe sap had expanded in wood, like a fireplace log shooting coals into the air.

A blackened board flew into the air. Then another.

Tompa stepped closer, peering into the heat. Embers glowed like demon eyes. The air shimmered and smoke spiraled up, shrouding … whatever it was. Tompa’s face felt like toast, yet she edged nearer still.

A shape struggled to rise. A head?

Yes, and shoulders, too.

But it couldn’t be Kilsing. The assassin’s armor was painted a rainbow of swirling colors, while this fiend from Hell was as dark as midnight. Thrusting blackened timbers aside, the shape rose. The head swiveled. Stopped when it pointed toward Tompa.

Lily Kilsing, charred and blackened, with tendrils of smoke leaking upward from her helmet like Lucifer’s halo, had risen from the dead.

Be sure to check out the great excerpts from other SFR Brigadiers!