Angela Quarles, author of Beer and Groping in Las Vegas

Mr. Valentine is delighted to have with us today Ms. Angela Quarles, whose upcoming contemporary  romance tale, Beer and Groping in Las Vegas has paranormal elements. Angela’s other works have been doing spectacularly well in writing contests around the US. With the excellent build up she has gotten, I’m eagerly awaiting this release on December 19, 2012.

You can pre-order the book at Secret Cravings. 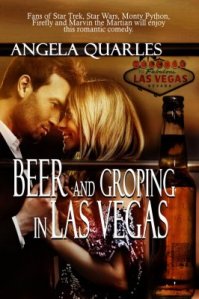 The title Beer and Groping in Las Vegas paints such a vivid picture. It promises humor, in the play on Fear and Loathing in Las Vegas; a sexy romance; and a friendly romp of a story that doesn’t take itself too seriously. Was it hard to develop such a great title? What was your thought process in coming up with it?

That’s about right, though the nod to Thompson’s book is mainly in the title—no drug-induced hazes in Beer and Groping 🙂 Though there is a slight paranormal element to it. But yep, humor, sexy times, lighthearted… I hate to say it, but this was one of the easiest titles I came up with. I work in a bookstore and was trying to think of possible titles for a new project (but one I didn’t have a premise for yet), and was shelving some Hunter S. Thompson, and I was like hmm, what could be a twist off of Fear and Loathing in Las Vegas, and first I was like Beer and Loathing, but I write lighthearted romances, and then ‘groping’ popped into my head. In the next instant I had the hero, as I thought he should be a microbrewer, and that the heroine would be an overworked software programmer. Once I had that, things started falling into place, including the description for him of being a geek trapped in a good ole boy’s body. I had that tagline for him before I even started writing the story. It was the first time I came up with a title first. Other titles have happened while I was brainstorming, and the one that’s about to go on submission (MUST LOVE BREECHES) took me forever! I think I went through two other titles during revisions and didn’t land on this until the third revision, and after some heavy duty brainstorming… The genesis for it though, was the same as BEER. I was wandering around the aisles of the bookstore, straightening up and looking at titles for inspiration and saw Must Love Dogs, and “Must Love Breeches” just popped into my head.

How important is humor in your work?

Very. If I can’t have humor in it, I don’t think I want to write it. Of course, what I find funny, others might not, so I’m fully prepared for some to not find it to their taste at all, and that’s okay. But for those others who have the same sense of humor, I hope they find my stories funny and entertaining. Some of my fave authors don’t have humor, but many do, and it’s them that inspire me. Even Jane Austen has humor in her work. It’s satirical, not slapstick, and sometimes very subtle, but it’s there, much to my delight. If I can make a reader smile, I’ve accomplished what I want to.

Are you as humorous in person as in your writing?

No! I think I’m fun to be around, but I’m not the jokester of the bunch, constantly making quips. Occasionally I do, and I’m secretly tickled when I get a laugh. I’m usually one of those that thinks of witty come backs after it’s too late, though. Perhaps that’s why I like to have it in my writing? I worried that because I wasn’t funny in person I wouldn’t be able to accomplish it in my writing. I’m good at making fun of myself though.

What other writing projects would you like to tell us about?

MUST LOVE BREECHES, that I mentioned above, is my time travel romance, full length, that I’ve been working on for two years. I finally felt ready to query this past fall and ended up signing with my agent in the beginning of October. We missed the pre-Thanksgiving window for submission due to Hurricane Sandy, so we’ll be going out on submission to publishers in early 2013. It’s about a thoroughly modern American working at the British Museum who has finally met the man of her dreams. There’s one problem: he lives in another century. She finds herself stranded in 1834 and is befriended by Ada Byron (later Ada Lovelace), Lord Byron’s daughter and considered by many to be the world’s first computer programmer.

Can a djinn and a magic slot machine bring two geeks together?

Riley McGregor is a geek trapped in a Good Ole Boy body and as owner of a microbrewery, smart chicks never look at him twice.

Rejected by a geek who wanted to “trade up,” Mirjam Linna would rather immerse herself in work than be the girlfriend-of-the-moment. Stranded in a Vegas hotel, she makes a wish—a night of hot sex with the man of her dreams. It’s granted. She agrees to dinner, but afterward, she’ll say thanks, but no thanks, and see what’s on the SyFy channel. But when they meet, they’re surprised to find they had a shared connection in their past. Sparks fly as these two learn to be in the moment, be themselves and find love.

Angela works at an independent bookstore and lives in an historic house in the beautiful and quirky town of Mobile, AL, with her two matched gray cats, Darcy and Bingley. When she’s not writing, she enjoys the usual stuff like gardening, reading, hanging out, eating, drinking, chasing squirrels out of the walls and creating the occasional knitted scarf. She’s had a varied career, including website programming and directing a small local history museum.

She’s an admitted geek and is proud to be among the few but mighty Browncoats who watched Firefly the first night it aired. She was introduced to the wonderful world of science fiction by her father, by way of watching reruns of the original Star Trek in her tweens and later giving her a copy of Walter M. Miller Jr’s A Canticle for Leibowitz as a teenager. She hasn’t looked back since.

She has a B.A. in Anthropology and International Studies with a minor in German from Emory University, and a Masters in Heritage Preservation from Georgia State University. She was an exchange student to Finland in high school and studied abroad in Vienna one summer in college. She recently found representation with Maura Kye-Casella at Don Congdon, Assoc.