Pictures from the Mars Rover “Curiosity”

For anyone who loves science or science fiction, the high-quality pictures sent back from Mars by the Curiosity rover are awe-inspiring.   To view the latest pictures, see NASA’s Mars Science Laboratory page.

Here are some of my personal favorites.

My computer’s wallpaper is set to this incredible picture of Mt. Sharp, which is Curiosity’s eventual goal.

Portrait of APXS on Mars

This image shows the Alpha Particle X-Ray Spectrometer (APXS) on NASA’s Curiosity rover, with the Martian landscape in the background. The image was taken by Curiosity’s Mast Camera on the 32nd Martian day, or sol, of operations on the surface (Sept. 7, 2012, PDT or Sept. 8, 2012, UTC). APXS can be seen in the middle of the picture.

One Small Step for Curiosity …

Curiosity leaves its mark on Mars

This scene shows the surroundings of the location where NASA Mars rover Curiosity arrived on Sept. 4, 2012. It is a mosaic of images taken by Curiosity’s Navigation Camera (Navcam) following the Sol 29 drive of 100 feet (30.5 meters). Tracks from the drive are visible in the image. For scale, Curiosity leaves parallel tracks about 9 feet (2.7 meters) apart. 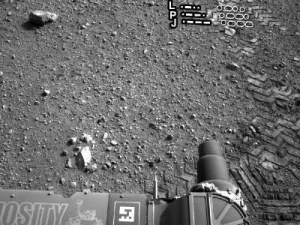 The straight lines in Curiosity’s zigzag track marks are Morse code for JPL, which is short for NASA’s Jet Propulsion Laboratory in Pasadena, Calif., where the rover was built and the mission is managed. The “footprint” is more than an homage to the rover’s builders, however. It is an important reference mark that the rover can use to drive more precisely via a system called visual odometry.

Have you been following Curiosity’s amazing trek?  Do you have any personal favorite pictures?

← Thought du jour
Where Do You Get Your Ideas? →